CLL is difficult to diagnose, because the symptoms only manifest in the later stages of the disease. As in all types of care, a late diagnosis often means worse prognosis.
August 2018 Vol 4 No 4
Lilly Ostrovsky

Chronic lymphocytic leukemia, or CLL, is a type of blood cancer and is the most common type of leukemia in adults in the United States. This cancer occurs when leukemia cells, or “lymphocytes” (a type of white blood cells), multiply out of control and replace the normal blood cells in the bone marrow, which reduces the number of red blood cells, platelets, and normal white blood cells.

According to the American Cancer Society, about 20,940 Americans will be diagnosed with CLL in 2018, and 4,510 will die from this disease. CLL mainly affects older adults, with an average age of about 70 at diagnosis.

CLL has 2 types—one that grows slowly (called indolent) and one that grows more aggressively. Knowing which type of CLL you have is important, because it will decide which is the best treatment for you. Because lymphocytes grow slowly in CLL, many people don’t have symptoms and don’t know they have CLL until they see a doctor for another reason and a blood test shows abnormal results.

People with CLL are at increased risk for infections, because the lymphocytes, which normally make antibodies that fight infection, don’t work as they should. Infections may include common colds and even pneumonia.

Often referred to as a “silent disease,” CLL can be difficult to diagnose, because people often don’t have any symptoms until later in the disease, and others have symptoms that resemble signs of other conditions, such as a cold. The common symptoms of CLL include excessive weakness, feeling tired, weight loss, chills, fever, night sweats, swollen lymph node(s), and pain or a sense of “fullness” in the stomach.

To diagnose CLL, your doctor will perform a physical exam to look for signs of CLL, such as enlarged lymph nodes, and will order a blood test to measure the levels of red blood cells, white blood cells, and platelets in your blood. A very high number of lymphocytes is a strong indication of CLL. A blood test is usually enough to confirm the diagnosis of CLL, but a bone marrow biopsy can tell how advanced the disease is.

Genetic tests are also helpful today to inform doctors how advanced the disease is and whether it is high-risk. For example, a cytogenetics test looks at chromosomes and detects if part of a chromosome is missing, which is called a “deletion.” In CLL, a deletion in chromosome 17p is linked to a poor prognosis, so people with 17p deletion have high-risk disease. Similarly, patients with CLL and the TP53 gene mutation also have a poor prognosis and have high-risk disease.

Treatment options for CLL vary, depending on the person’s age, general health, and disease risk. Several treatment options exist for patients who are first diagnosed with CLL.

However, early treatment has not been shown to increase patients’ life span, and treatment can cause many side effects. Therefore, most doctors recommend “watching and waiting” to start treatment when the disease worsens, or if patients begin to have symptoms.

The Table lists chemotherapy drugs and other drugs, including newer monoclonal antibodies and kinase inhibitors, that are used for the initial treatment of patients with CLL, as well as for those whose disease relapsed after the initial therapy, and for patients with the 17p deletion or the TP53 gene mutation. 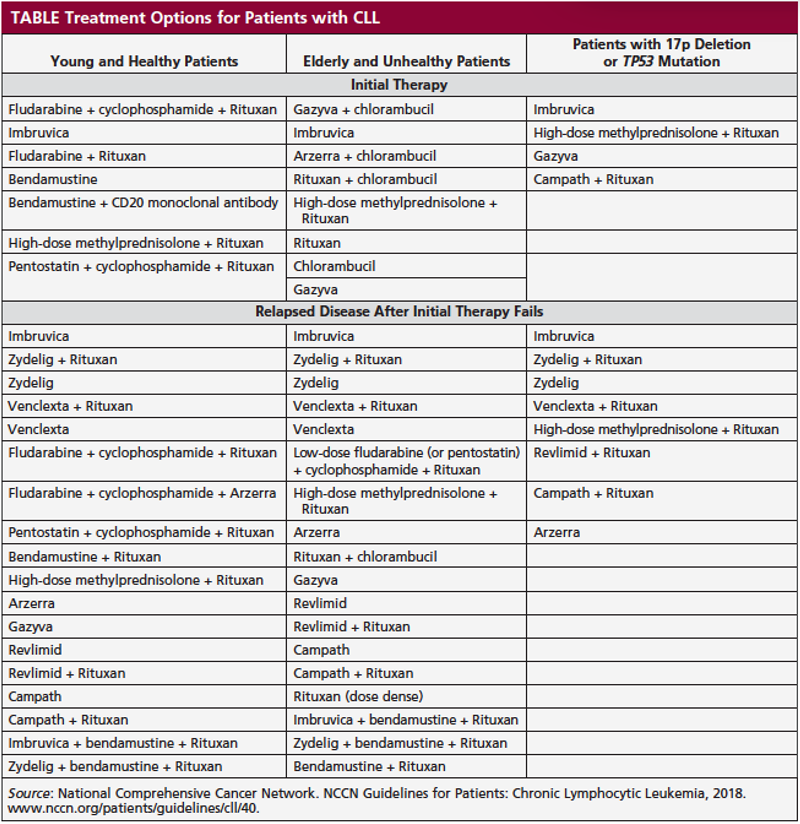 For younger patients who don’t have high-risk disease, initial (first-line) treatment for CLL may include chemotherapy, alone or in combination with other drugs, typically with monoclonal antibodies. The first-line treatment of CLL in healthier people typically includes a combination of chemotherapies plus the monoclonal antibody Rituxan (rituximab) or Rituxan Hycela (rituximab plus hyaluronidase human), as well as the Bruton’s kinase inhibitor Imbruvica (ibrutinib) alone. Another first-line treatment option includes Rituxan plus high-dose prednisone. Rituxan plus another monoclonal antibody, Campath (alemtuzumab), may be used in patients with 17p deletion or in patients with the TP53 mutation.

Radiation therapy may be an option for patients who have an enlarged spleen or swollen lymph nodes. Surgery to remove the spleen is an option if it’s causing symptoms. Some people with a poor prognosis may undergo stem-cell transplant, in which stem cells are collected from the blood and replaced after chemotherapy and/or radiation.

Treatment for Relapsed or Refractory Disease

The combination of Arzerra plus various chemotherapies can also be used in patients whose disease came back.

Many new drugs are being studied in clinical trials as potential new treatments for patients with CLL or as new combinations with other drugs, including the new immunotherapies known as checkpoint inhibitors and CAR T-cell therapies, which use the person’s own immune system to fight cancer cells.

Currently, 2 CAR T-cell therapies have been approved for some types of blood cancers, including some types of leukemia, but not yet for patients with CLL.

Speak with your doctor about whether participating in a clinical trial is a good option for you.

Leukemia & Lymphoma Society
http://www.lls.org/leukemia/chronic-lymphocytic-leukemia/treatment/chemotherapy-and-drug-therapy
National Comprehensive Cancer Network
http://www.nccn.org/patients/guidelines/cll/40
Recommended For You
Leukemia
Acalabrutinib-Based Triplet Shows Promise in Frontline CLL Study
The chemotherapy-free combination of venetoclax plus obinutuzumab has shown efficacy and tolerability in older patients with chronic lymphocytic leukemia. Adding acalabrutinib, a new targeted agent, may enhance the clinical benefits of this regimen, according to results of a clinical trial.
Leukemia
New Scoring System Helps Patients with CLL and Their Doctors Know When to Start Treatment
Cancer specialists are now able to use a new scoring system to decide when to start treatment for patients who have been diagnosed with chronic lymphocytic leukemia.
Leukemia
Clinical Trial Will Evaluate Novel 3-Drug Regimen for First-Line Treatment of CLL
Alliance A041702 is a large clinical trial that is exploring whether adding venetoclax to the combination of ibrutinib and obinutuzumab can improve outcomes in patients with chronic lymphocytic leukemia.
Leukemia
Undetectable Minimal Residual Disease Associated with Long-Term Survival in CLL
According to results from a recent study, patients with chronic lymphocytic leukemia are more likely to survive for longer time periods if their posttreatment tests show no evidence of residual disease.
Last modified: October 7, 2018