What You Need to Know About Lung Cancer 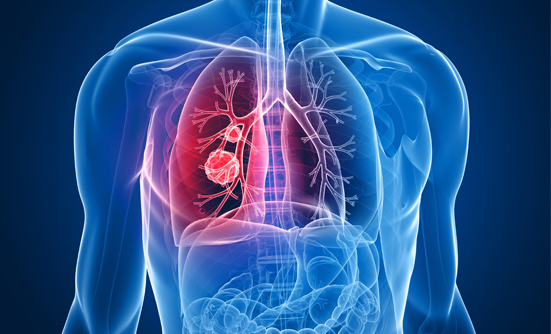 According to the American Cancer Society, lung cancer is the second most common cancer in men and in women, accounting for approximately 13% of all new cancers.
December 2015 Vol 1 No 6

According to the American Cancer Society, lung cancer is the second most common cancer in men and in women, accounting for approximately 13% of all new cancers. The American Cancer Society estimates that 221,200 new cases of lung cancer will be diagnosed in the United States in 2015, and 158,040 patients will die from the disease. Lung cancer is responsible for about 27% of all cancer deaths–more than colon, breast, and prostate cancer deaths combined–and is the leading cause of cancer-related death among men and women in the United States.

According to the American Cancer Society, 20% of lung cancers (usually adenocarcinoma) occur in people who have never smoked; it is often linked to secondhand smoke or genetics. Exposure to radon, asbestos, air pollution, and other environmental carcinogens can also cause lung cancer.

The symptoms of lung cancer depend on the location of the tumor within the lungs and chest wall. Common symptoms include cough, blood-tinged mucus, shortness of breath, and recurring pneumonia.

As lung cancer grows and spreads, it can obstruct structures within the chest, causing hoarseness, neck swelling, fluid accumulation between the lung and the chest wall, pain, weakness, loss of appetite, and weight loss.

Currently, there is no definitive screening method for lung cancer. Several organizations have suggested that people at a high risk for lung cancer (those who are 55-74 years who have smoked 1 pack of cigarettes daily for 30 years or more, and who stopped smoking less than 15 years ago) should have a CT scan screening test.

A physical exam, medical history, and many diagnostic tests are used to diagnose lung cancer. These include:

After a lung cancer diagnosis is confirmed, tests are done to determine if the disease has spread, and the disease stage. The stage of cancer determines the patient’s prognosis and the best approach to treatment.

Lung cancer is divided into 4 stages—stages I and II are considered early stage, and stages III and IV represent advanced stage.

Certain genetic changes (mutations) have been found in lung cancer that can cause lung cancer and affect how a patient responds to therapy. Genetic testing is an important part of diagnosing this disease; if such changes exist, they will affect how the cancer responds to treatment and which therapy is best. Currently, the 2 best known genetic changes associated with lung cancer are EGFR and ALK mutations. Other mutations and pathways, including KRAS and VEGF, are also linked to lung cancer and more are being studied.

Surgery. Resection (removal by surgery) of the tumor. Surgery is usually the main treatment for stage I or II lung cancer

Chemotherapy. Preoperative chemotherapy, chemotherapy after surgery with Platinol (cisplatin) or Paraplatin (carboplatin), and maintenance chemotherapy with Alimta (pemetrexed) or Tarceva (erlotinib) is used to delay the progression of lung cancer.

Stage IV (advanced) lung cancer has been typically treated with chemotherapy, which is not a cure but can increase survival and improve the patient’s quality of life. Surgery and radiation therapy can be used to control symptoms and improve quality of life.

Many drugs have been studied for advanced lung cancer, including newer targeted therapies and modulatory drugs that affect the immune system. Immunotherapies stimulate the immune system to reject and kill cancer cells.

Targeted therapies for advanced lung cancer with specific mutations include Tarceva (erlotinib) or Iressa (gefitinib) for EGFR mutations, Xalkori (crizotinib) for ALK mutations, and Avastin (bevacizumab) for VEGF changes. Tagrisso (osimertinib), which is the most recently approved lung cancer treatment, is approved for patients with advanced NSCLC and the EGFR T790M mutation.

Other immunotherapies are now being developed for patients with different types of lung cancer.