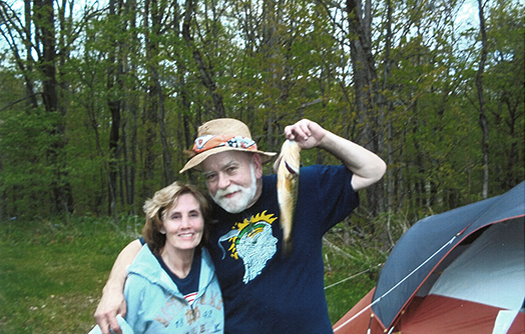 My husband passed away from metastatic melanoma more than 1 year ago. Jack was my first true love. We got married, had 6 children, and now have 11 grandchildren. He was a police officer until he retired after 25 years, then he became a bartender. As a nurse, I often wondered about that-arresting people for drinking beer, then turning around and serving it to them, but oh well.

Besides being a husband, father, grandfather, and a good friend to many, Jack was an Eagle Scout, an altar boy, had gone to the seminary to become a priest (which didn’t quite pan out), sailed the Great Lakes as a merchant marine, and attended Indiana University, where he roomed with my brother (and that’s how we met).

He loved camping and hunting, was on bowling and softball teams, went to the Indy 500 and the White Sox home opener every year, attended our kids’ many sports and school events, and welcomed 9 of our 11 grandkids into the world. He was fun, outgoing, smart, a good listener, a great talker, and people were just drawn into his world. There were hundreds of people at his wake: I didn’t realize how many lives he had touched until that night.

From Heart Surgery to Melanoma

Smoking cigarettes and diabetes gave Jack the distinct pleasure of clogging his arteries and needing a triple bypass surgery in 2011, but he recovered just in time to be diagnosed with stage III melanoma 6 months later, which had already spread into his lymph nodes. He underwent a radical dissection of his back and removal of the lymph nodes in his axilla.

Around Christmas 2013, Jack stopped talking spontaneously, became quieter, and didn’t answer questions. I wondered if he was depressed, or was something else wrong? We went to see his primary care physician, who sent him for a brain MRI.

The MRI technician immediately called the doctor, who told me to take Jack directly to the emergency room. The neurosurgeon asked me if I had considered hospice. Hospice? By that time, our children were at the hospital, and we were all in various stages of shock and disbelief.

The oncologist decided to use aggressive treatment, and gave Jack massive doses of steroids. His condition improved immediately and 3 days later, a massive frontal lobe tumor and 2 smaller tumors on the side of the brain were removed.

Jack came back to his old self, although he was no longer allowed to drive. So I had to drive him everywhere, which made him mad, and he nicknamed me “Miss Daisy.” He was the world’s worst “front-seat driver” ever! I just tuned him out and drove the car.

After his brain tumor surgery, the oncologist wanted Jack to get a new chemotherapy drug that had just become available, plus radiation treatments. We went out to eat after the appointment and he looked at me and said, “What would you do if this were you?” I told him I would fight like hell until the very end. I also said, “decide what’s best for you, and I’ll support any decision you make.” Much later, my kids told me he decided to continue treatments for my sake.

Jack was such a clown during his doctor visits and radiation treatments. He would walk out of the scanner and into the waiting room full of people and announce that someone’s foot slipped on the pedal, and they gave him too much radiation. Another time he came out from the infusion room and said, “next victim.”

He made the coffee in the transfusion room, because “you girls don’t know how to make good coffee.” I started bringing the office staff candy and cookies for their “putting up” with his nonsense. When his treatments were completed, they were all sad to see Jack leave. Everybody loved him!

That last appointment I realized he wasn’t going to get better. The doctor said that the brain tumors were “not responding as well as expected” and suggested to refer him to a hospice. I walked out behind Jack, and the nurse practitioner came up to me with tears in her eyes and gave me a hug. I felt like I got slammed up against a wall: I couldn’t breathe.

Jack slowly deteriorated, had trouble walking, and became incontinent. He was such a modest man and tried to get to the bathroom in time, but fell a few times doing it. One time he fell into the bathtub and hit the hot water faucet on the way down, suffering second-degree burns on his shoulder and back.

I could no longer trust him to be alone in the house while I was at work. I made arrangements for kids, in-laws, and his sister or brother-in-law to stay with him during the day.

He so loved camping, so Chuck, one of his best friends, drove him to our favorite campground on a few weekends. I met them after I got off work, and our kids came down, too, and we all had fun and tried to act normal. I saw the tears in their eyes when I had to pick up Jack’s feet to help him walk-the reality was setting in.

The end came on November 11, 2014, peacefully, with the whole family surrounding him. Hundreds of people were at his wake. The funeral was massive, with more than 120 cars. I picked 8 pallbearers; could have picked 28, so many wanted the honor. Two fire department ladder trucks held the American flag in front of the police station as the funeral procession wound down the main street of Griffith, an honor guard and bagpipes at the grave site. Nothing in our 38 years of marriage could have prepared me for this.

Back home, our younger grandkids often run down the hallway, asking, “Is Papa back from heaven yet?” “No, he has a big new chair, and he gets to talk to God every day.” “Does he get ice cream?” “Yes, if he wants it.” That makes them smile and go off to play.

It’s not the birthdate or the date of death on the tombstone but what is in the dash in the middle that counts. Remember this for your own lives-pack as much life into the dash as you can manage. A bad day on earth beats a good day in the ground (courtesy of my father).

And the rest of us? We are slowly crawling out of the fog of grief. Believing in God and Jack being in heaven is enough for right now. And, Papa has ice cream!