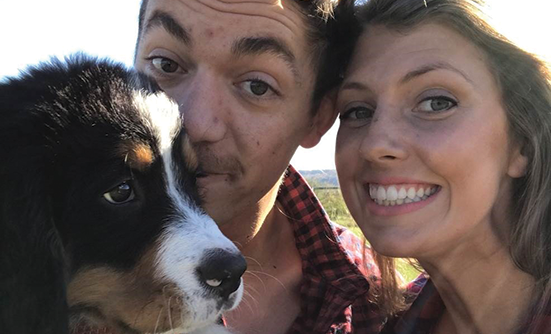 At age 28, Thomas Iorio went into the hospital with a possible ear infection, after noticing swollen lymph nodes, and came out with a probable cancer diagnosis.
February 2018 Vol 4 No 1
Thomas Iorio
Alexandria, Virginia

The only thing I knew about cancer before being diagnosed with it came from what I saw on TV or in movies. At age 28, none of my friends had experience with it, and none knew what it was like to be told you may not live more than 5 years. 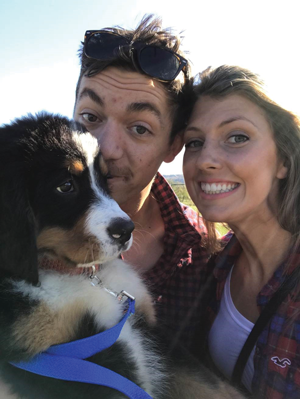 When I first noticed that the lymph nodes in my neck near my clavicle were swollen, I thought I had an ear infection, not lung cancer. I never smoked. I have no family history of lung cancer. I’m in good health, and I didn’t think there was a chance I would ever have lung cancer. It turns out I was wrong.

Luckily, the ear, nose, and throat doctor I saw determined quickly that it wasn’t a simple ear infection. He recommended I have a CT scan as soon as possible. It was a crazy day: I went in for a possible ear infection and came out with a probable cancer diagnosis.

I had a CT scan at the hospital, which looked bad, and the doctors suspected I had lymphoma. The scan showed I also had a pulmonary embolism, but I was sent home to wait for the results of additional tests.

That didn’t work out too well. I started feeling really bad soon, and ended up passing out while on the phone with 911. It was determined that I had pericardial effusion—an accumulation of fluid around the heart. The fluid compressed my heart, making it difficult for it to beat. I later learned that this is relatively common in patients with lung cancer.

After surgery to drain the fluid, I spent 2 weeks in the hospital. I was back home for a week when the fluid returned, and I returned to the hospital for additional surgery. During this hospitalization, I had a blood clot in my arm, which was the cherry on top of a series of unfortunate events. Those few weeks leading up to the official diagnosis of cancer were physically brutal. I went from being a guy who was doing CrossFit regularly to a guy who had difficulty walking up the stairs. It took a lot out of me mentally, too.

I thought the relief would come when I finally got a diagnosis, but instead it was horrible. The doctor walked in and rather bluntly told me I had non–small-cell lung cancer (NSCLC), and that people with this disease typically don’t live more than 5 years.

During this time of having cancer, I have learned that my naïve thoughts growing up that all doctors know everything weren’t exactly true. The doctor who told me I had lung cancer wasn’t a lung cancer specialist, and her knowledge was based on a few people at risk for this cancer, that is, nonsmoking women, typically of Asian descent.

There are not a lot of data on people like me—a young male with cancer centralized to the lymph nodes rather than the lungs. That means no one truly knows how my cancer is likely to progress. The way the doctor told me I had cancer left me feeling hopeless, as if it was something I couldn’t battle. I went on feeling that way, until Dr. Benjamin Levy, the Clinical Director of Medical Oncology at Johns Hopkins Sidney Kimmel Cancer Center, called me. He had heard there was someone in the Washington, DC, area who was in his twenties with lung cancer. He said he was trying to find that person and figure out what was going on.

I’m one of the first Caucasian males in his twenties whom Dr. Levy has treated for lung cancer. In addition, apparently, the genetics of my cancer don’t make a lot of sense. I have lung cancer associated with ALK mutation, but it is also associated with high PD-L1 expression, which is an unusual combination.

Dr. Levy said I should get Alecensa (alectinib), a drug that is designed to target lung cancer associated with ALK mutation; however, at the time it was approved only as a second-line treatment for patients with ALK-positive NSCLC. We had to fight aggressively with my health insurance company to cover the use of this drug, because Dr. Levy was confident that this drug would be best for me. And indeed, since then, Alecensa has been approved as a first-line treatment for people with metastatic ALK-positive NSCLC.

Leave Your Expectations at the Door

I don’t have any negative side effects. I have a wonderful, luscious head of hair. I can still lift weights. I can run around. I may get sleepy every now and then, but that may be because I have been getting up in the middle of the night to let my new puppy outside to relieve himself.

I have to go to the doctor more than I would like, but that is a part of having cancer. I get checkups every month, I talk to the doctor, and I have CT scans every 90 days.

My situation is not what I expected it to be when I was first told I had lung cancer. I can go to work, and do all sorts of things that I like to do, and I don’t have to think about it all the time. Although I do think about fighting cancer every day, it’s not always at the top of my mind, and it doesn’t dominate my thoughts.

So far, my response to treatment has been great. The lymph nodes, which is where my cancer is located, have shrunk. I understand that I will probably have cancer forever, but I no longer think that I only have 5 years to live.

Resolve and a New Mind-set

Having cancer is obviously not great for my overall health, but I believe that my body has incredible capabilities, and because nothing is defined when it comes to being a 28-year-old with lung cancer, I’m certainly not taking anything that anyone tells me as a definite.

When you’re faced with cancer, you get a better outlook on life. In a way, you almost gain some freedom. I now care less about what other people think, and I don’t feel the need to hold in things that I would have before.