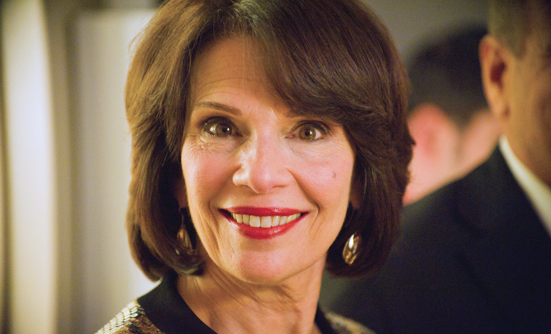 Hildy Grossman describes her struggle with the stigma linked to a lung cancer diagnosis and her work, through Upstage Lung Cancer and music, to educate the public about lung cancer.
June 2018 Vol 4 No 3
Hildy Grossman
Brookline, Massachusetts 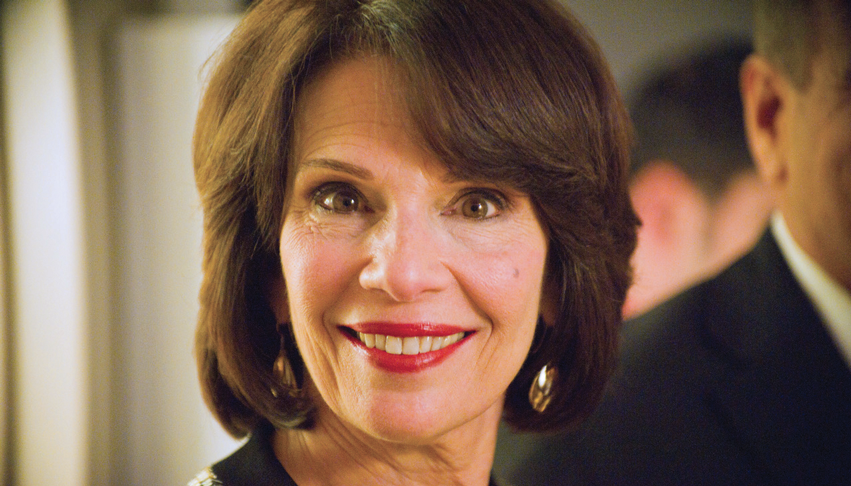 Years ago, feminist and activist Gloria Steinem was featured on the cover of a magazine at age 50. When a reporter commented that she didn’t look her age, Ms. Steinem replied, “Well, get a good look, because this is what 50 looks like.”

I remembered Gloria’s words when I told people I had lung cancer. Before my own experience with lung cancer, when I thought of a person with lung cancer, I’d imagine an old man surrounded by a cloud of cigarette smoke. But when I was diagnosed and looked in the mirror, I thought, “This is what lung cancer looks like.”

Struggling with the Stigma

In 2006 I bought a new pair of shoes with a slick sole and proceeded to slip down my back stairs and hurt my wrist. That started a chain of misdiagnoses. A neurologist suggested I get an MRI to check for a pinched nerve in my back. It turned out my back was fine, but my lungs weren’t. The MRI picked up 2 tiny spots on my right lung, which a biopsy showed to be cancer.

Of course, the initial shock was remarkable. All my husband and I could think about was how much time did I have. What I didn’t expect was the enormous embarrassment I felt when my husband told the neighbors about my lung cancer diagnosis. I remember thinking that if I had a horrible communicable disease, I couldn’t feel more shame. The stigma surrounding lung cancer is enormous. The first question anyone asks is, “Did you smoke?”

Behind that question is, “You did this to yourself.” It’s almost as if people hope you smoked, so you’d have a reason for getting lung cancer; you did it to yourself. If those asking the question don’t smoke, they feel relief that it won’t happen to them. In fact, 65% of all new lung cancer diagnoses are in former smokers or in people who have never smoked.1

Smoking is never good for health, but even if someone does smoke, no one deserves lung cancer. When filling out the forms before surgery about smoking, I was grateful to say I was a former smoker—20 years earlier. The stigma is almost a physical experience.

I knew that if I was struggling with this diagnosis, other people diagnosed with lung cancer were as well. I thought that the most valuable thing I could do was to find a way to do everything in my power to help other people with lung cancer, and to try and make a difference in this vast arena.

When I was first diagnosed 11 years ago, there were very few patient advocacy organizations. I tried to find events that were fundraising for research, so I could volunteer, but I couldn’t find any. That motivated me to invest my time and energy to start my own organization.

I thought the best way I could help other people struggling with lung cancer was to provide education on the importance of early detection, attempt to minimize the stigma surrounding this disease, and support struggling patients. This was a major undertaking. I was so fortunate to have my lung cancer found by accident. I wanted to create an organization that would help diagnose lung cancer earlier and reliably. At the time, there wasn’t a great deal to offer, but I knew I had to try.

The Power of Music

I am a clinical psychologist and a professional singer—2 positions that allow me to connect with others. When I decided to start a patient advocate organization, I knew that the one thing I could do was to create a great musical event. I have produced, directed, and performed in many musical productions, including those featuring my jazz/cabaret group—the Follen Angels.

Music is very powerful and a key ingredient in human experiences. We use music to celebrate, raise our spirits, and comfort us in times of loss. Because many people don’t want to talk about lung cancer, I believed that if we used musical events as a vehicle to get the word out, we would destigmatize the disease, as well as raise awareness and research funds to combat the disease. We hope to balance the apprehension people have regarding talking about cancer with the ability of music to connect on a deeper level.

In October 2008 we held our first fundraiser—an intimate Follen Angels cabaret/jazz concert in a private home. The following year we began our annual fall concert, with professional performers and hosted by A&E Emmy Award winner Joyce Kulhawik. The event also features an inspirational talk about lung cancer by a current patient, a survivor, or a researcher, and the presentation of our Fan Award to an outstanding individual who has made an impact on lung cancer. 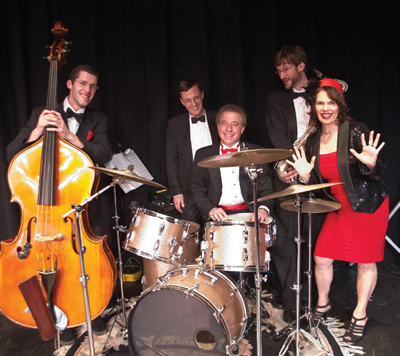 Hildy with her Follen Angels group.

This year, on October 23, we will produce our 10th annual concert, with many of the same cast, and with Ms. Kulhawik returning to host. We are 10 years stronger!

At Upstage Lung Cancer—a nonprofit patient advocacy organization—it’s important for us to help educate the public about lung cancer. As noted earlier, many people mistakenly believe that only those who smoke will get lung cancer, but in fact, more than half of those diagnosed never smoked or have quit years ago.

There’s also an underlying belief that lung cancer is a cancer that primarily affects men, but it is actually the leading cause of cancer-related deaths in women—more than ovarian, breast, uterine, and colon cancer combined.

In the past 39 years, the rate of new lung cancer cases has fallen by 32% among men but increased 94% among women.

Our main goal at Upstage Lung Cancer is helping to fund research to aid in the early detection of lung cancer. If you can detect lung cancer while it is still in stage I, which means the cancer has not spread, there is at least a 75% chance of a 5-year survival, as opposed to when it is found in later stages, when the 5-year survival rate drops down considerably.

The problem is that most people don’t find out they have lung cancer until it has progressed to a later stage. Lung cancer has very few symptoms early on, and in most of the people whose cancer is diagnosed in the earliest stages, this happens by “accident,” when they go in for a checkup or for other medical reasons. At Upstage Lung Cancer we say, “Survival should not be by accident.”

I believe that research focusing on early-detection methods, including low-dose CT scans, is going to change the landscape of lung cancer treatment. We are investing in research using liquid biopsies, special optics to improve the reliability of traditional biopsies, and testing for novel molecules in blood and urine that could potentially find cancer during routine physicals. This research is going to save lives. It’s an exciting time to support research in lung cancer: there is so much hope surrounding what is on the horizon.

Sometimes the worst circumstances lead to really powerful outcomes. Because I was fortunate enough to survive this diagnosis, I’ve connected with amazing people who do heroic things every day but are never going to appear in newspapers.

In living with lung cancer—dealing with treatments, getting an annual CT scan, and volunteering for organizations—are unsung heroes. I often say that having had lung cancer has enriched my life, because I’ve met many amazing people who have been so generous with their time and efforts. Their willingness to help extends well beyond what you would ever imagine.

You don’t see their photos or names in headlines, but there are doctors, researchers, patients, caregivers, patient advocates, and many volunteers who work every day to make a difference. Their work adds great meaning to life. 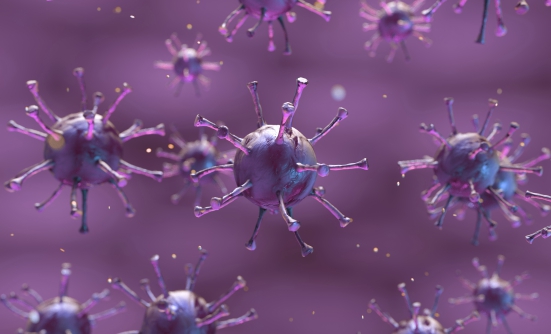 COVID-19 (Coronavirus)Lung CancerWeb Exclusives
Updated Joint Statement on Coronavirus (COVID-19) from Lung Cancer Groups
LUNGevity and 4 other lung cancer organizations have provided information on the new coronavirus for people with lung cancer and other patients with cancer. This update also provides reliable sources of information for patients. 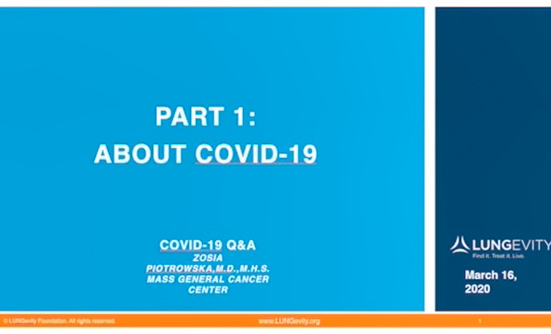 COVID-19 (Coronavirus)Lung Cancer
COVID-19 Conversation: Part 1: About Coronavirus – COVID-19
By Zosia Piotrowska, MD, MHS
Oncologist Dr. Zosia Piotrowska addresses some specific questions about the impact of COVID-19. She discusses dealing with anxiety, symptoms, who is most at risk for the illness, how it is spread, how to avoid getting the illness, and the available treatments.
Last modified: August 13, 2018