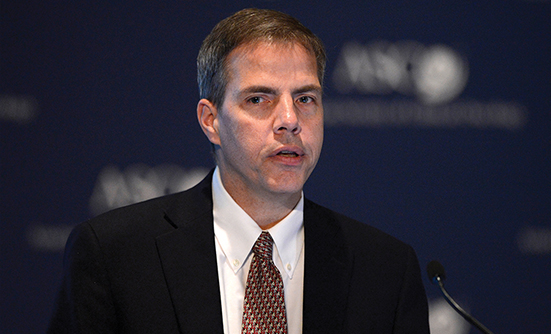 The targeted therapy Calquence (acalabrutinib), a Bruton tyrosine kinase (or BTK) inhibitor, which is approved by the FDA for the treatment of patients with non-Hodgkin lymphoma has now demonstrated long-term remissions as first-line treatment of patients with chronic lymphocytic leukemia (CLL), according to data presented at the 2020 ASCO annual meeting.
ASCO 2020 Highlights
Chase Doyle

The long-term results of a phase 2 clinical trial of acalabrutinib were presented at the meeting by John C. Byrd, MD, D. Warren Brown Chair of Leukemia Research at Ohio State University Comprehensive Cancer Center, in Columbus, Ohio. The results showed that 97% of the patients with CLL had a response to treatment with this targeted therapy.

The responses were durable, with 86% of the patients still receiving treatment after almost 2.5 years. The treatment was also well-tolerated, with no long-term side effects, according to Dr. Byrd. Collectively, these data support the use of acalabrutinib for first-line treatment of patients with CLL, he said.

“Acalabrutinib monotherapy produced a very high and durable response, regardless of high-risk genomic characteristics seen in previously untreated CLL,” said Dr. Byrd. “The toxicity associated with acalabrutinib was generally mild, with only a small subset of patients discontinuing therapy due to adverse events.”

The use of BTK inhibition has improved clinical outcomes in patients with relapsed (coming back) or refractory (not responding to treatment) CLL and in newly diagnosed patients with CLL. Acalabrutinib is a selective, new-generation BTK inhibitor that has shown improved activity in some situations compared with other BTK inhibitors, such as Imbruvica (ibrutinib), the first BTK inhibitor approved by the FDA.

In late 2019, acalabrutinib was approved for the treatment of previously untreated patients with CLL or with relapsed or refractory CLL or small lymphocytic lymphoma, based on 2 phase 3 studies.

At the ASCO meeting, Dr. Byrd reported the updated results of ACE-CLL-001, the first phase 2 study of acalabrutinib in previously untreated patients with CLL. In the expansion phase of the study, 99 patients who have not received previous treatment were enrolled and received acalabrutinib until their cancer progressed or until unacceptable side effects.

Patients initially received a dose of 100 mg twice daily or 200 mg once daily. Later in the study, when it was identified that twice-daily dosing was potentially better, all patients received the 100-mg twice-daily dose.

After an average follow-up of almost 2.5 years (53 months), most (86%) of the patients were still receiving acalabrutinib therapy, meaning that their CLL was responding to treatment.

The results of the study showed that 97% of the patients had a positive response to therapy, including 7% who had complete response (no sign of cancer) and 90% had partial response, meaning their cancer was either stable or reduced but not completely gone.

The response was relatively fast, with an average time before the cancer was responding to therapy of 3.7 months.

Serious side effects were reported in 38% of patients, with pneumonia and sepsis being the only events that occurred in 2 or more patients. In addition, 2 patients died during the study, 1 from multi-organ dysfunction related to pneumonia and the other from cardiac failure; both deaths were believed to be unrelated to acalabrutinib therapy.

CLL Monthly MinutesLeukemia
Combining Targeted Therapies in CLL
The combination of acalabrutinib, venetoclax, and obinutuzumab has been shown to be an active regimen in previously untreated patients with CLL.

CLL Monthly MinutesLeukemia
A Comprehensive Analysis of COVID-19 in Patients with CLL
During the first 13 months of the pandemic, COVID-19 continued to result in high hospitalization rates among patients with CLL.

CLL Monthly MinutesLeukemia
Infections in Patients with CLL Receiving Ibrutinib
Identifying the risk factors for infection may allow preventive measures to be taken to protect patients.

CLL Monthly MinutesLeukemia
Measuring Treatment Adherence to Oral Therapies in Patients with CLL
Oral targeted therapies have revolutionized treatment for patients with CLL but ensuring that they are taken as prescribed is crucial to achieving optimal outcomes.
Last modified: September 11, 2020