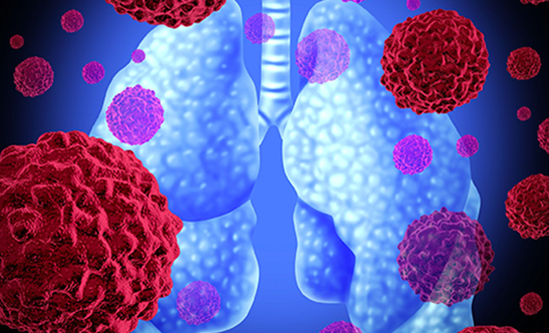 Check out some of the most exciting immunotherapies that are giving hope to people fighting this disease, which is responsible for 1 in every 4 cancer-related deaths in the United States.
June 2017 – Cancer Immunotherapy
Kristen Chanley

Lung cancer remains the leading cause of cancer-related deaths in men and women, accounting for 1 in every 4 deaths caused by cancer in the United States, according to the American Cancer Society. However, recent advances in immunotherapy treatment for lung cancer—especially for the type of lung cancer known as non–small-cell lung cancer (NSCLC)—are giving hope to patients living with this disease.

So far, 3 checkpoint inhibitors have been approved by the FDA for NSCLC since March 2015, and many new immunotherapy drugs are now in development. In addition, researchers are studying the possibility of using other drugs or chemotherapies together with immunotherapy drugs, as well as the combination of 2 immunotherapy drugs together, as potentially the best way to prolong survival and improve outcomes for patients with lung cancer.

“Immunotherapy is a powerful new tool that we are just learning how to best use for treating lung cancer. It is really important that we do the clinical trials that will tell us which immunotherapy agents or combinations are right for individual patients,” says David P. Carbone, MD, PhD, Barbara J. Bonner Chair in Lung Cancer Research, and Director, James Thoracic Center, Ohio State University Comprehensive Cancer Center, Columbus.

Why Is Immunotherapy Successful in Lung Cancer?

Initially, lung cancer was considered a non-immunogenic cancer type, because it had not responded well to immunotherapy that was meant to stimulate the growth of immune cells and control the growth of cancer cells.1 However, with increased understanding of the immune system and its relation to malignant tumors, researchers discovered that tumors were actively inhibiting the immune response at certain “checkpoints,” and inhibitors of these checkpoints had the ability to amplify the body’s immune response to cancer cells. This discovery opened the door to immunotherapy drugs for patients with lung cancer.

However, just because lung cancer is a good fit for certain types of immunotherapy does not mean that immunotherapy will work for every patient with lung cancer. Checkpoint inhibitors that target the PD-1 and PD-L1 (a protein that binds to the PD-1 checkpoint) have so far been found successful in lung cancer.

Having PD-L1 expression often dictates whether a patient is eligible for treatment with drugs called PD-1 inhibitors. So far, PD-1 inhibitors are effective only in approximately 20% to 30% of patients with NSCLC, according to researchers. So investigators are continuing to study new types of immunotherapy drugs as well as combination drugs for lung cancer.

The anti-PD-1 Opdivo (nivolumab) was first approved by the FDA in 2015 for use in patients with advanced or metastatic (spreading) NSCLC, regardless of PD-L1 expression, in patients whose disease continues to progress during or after platinum-based chemotherapy. Opdivo can be used in patients with NSCLC that is associated with specific genetic mutations called EGFR or ALK and whose lung cancer progresses despite the use of appropriate therapies. Opdivo is administered intravenously over 60 minutes, once every 2 weeks.

In October 2015, the FDA approved Opdivo for patients with nonsquamous NSCLC after a study showed that the use of Opdivo increased patient survival to an average of 12.2 months compared with 9.4 months with chemotherapy.

The side effects associated with Keytruda are also generally mild and less than with chemotherapy, and include fatigue, pruritus, diarrhea, decreased appetite, rash, fever, cough, difficulty breathing, musculoskeletal pain, constipation, and nausea.

The third anti-PD-L1 immunotherapy drug is Tecentriq (atezolizumab), which was approved by the FDA in 2016 for patients with metastatic NSCLC that continues to progress during or after platinum-containing chemotherapy. Patients with NSCLC and EGFR or ALK mutations can receive Tecentriq if their cancer progresses despite receiving appropriate therapy with other drugs. Tecentriq is administered intravenously over 60 minutes, once every 3 weeks.

The approval of Tecentriq for lung cancer was based on 2 studies that compared this immunotherapy drug with chemotherapy. In both studies, patients with lung cancer who received Tecentriq survived an average of at least 3 months longer than those receiving chemotherapy.

The side effects were again mild; the most common side effects with Tecentriq occurring in more than 20% of patients are fatigue, decreased appetite, cough, difficulty breathing, nausea, musculoskeletal pain, and constipation.

New Treatments on the Horizon

Although only PD-1/PD-L1 checkpoint inhibitors have been approved for the treatment of patients with lung cancer so far, other immunotherapy drugs are being studied.

Another immunotherapy being studied for lung cancer is known as “adoptive-cell therapy.” This technique involves removing T-cells from the patient and genetically altering those cells to increase their anti-cancer activity.

The T-cells are then given back to the patient, with a goal of improving how the patient’s immune system fights cancer. Several adoptive-cell therapy techniques are currently in clinical trials, including for lung cancer.

Although immunotherapies, especially checkpoint inhibitors, have been breathing new life into lung cancer treatment, there is much work to be done. Researchers believe that the answer can be found in combining various immunotherapies with each other, or combining an immunotherapy with traditional chemotherapy or radiotherapy.

We wish to thank David P.Carbone, MD, PhD, for his contribution to this article and his thorough review of the contents. Dr. Carbone is Barbara J. Bonner Chair in Lung Cancer Research, and Director, James Thoracic Center, Ohio State University Comprehensive Cancer Center, Columbus. He is an expert in the molecular genetics of lung tumors, and his research is focused on lung cancer, specifically genetics, immunotherapy, and gene therapy. He serves on LUNGevity Scientific Advisory Board.