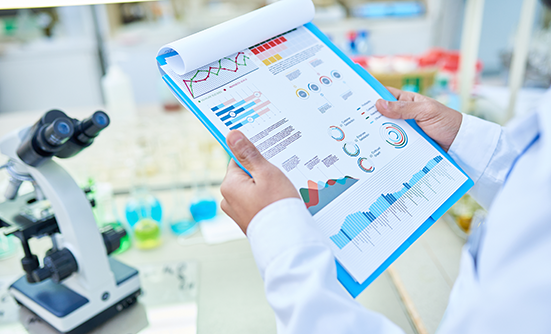 This first-ever direct-to-consumer genetic test can provide information on potential risks to individuals who may not have access to genetic screening, but the information may be misleading without feedback from experts.
May 2018 – Cancer Biomarkers and Molecular Testing
Dana Taylor

In March 2018, the FDA approved the first-ever direct-to-consumer (DTC) test that can identify 3 types of BRCA gene mutations (or changes), which are among the gene mutations that can be inherited and may be associated with increased risk for some cancers.

BRCA mutations are often associated with breast cancer, but they are also related to other types of cancer, such as ovarian and prostate cancer.

Having a BRCA1 or BRCA2 mutation is associated with increased risk for breast cancer among Jewish women of Ashkenazi (Eastern European) descent, but only about 2% of these women carry these genetic abnormalities. In the general population, having 1 of these 3 mutations does not necessarily mean that the person is at increased risk for cancer.

A New Tool for Everyone

This new genetic test is called Personal Genome Service Genetic Health Risk Report for BRCA1/BRCA2 (Selected Variants) and is marketed by 23andMe, a private commercial company that is focused on personal genetics.

“This test provides information to certain individuals who may be at increased breast, ovarian, or prostate cancer risk and who might not otherwise get genetic screening, and is a step forward in the availability of DTC genetic tests. But it has a lot of caveats,”1 said Donald St. Pierre, FDA Acting Director, Office of In Vitro Diagnostics and Radiological Health, in a press release.

“While the detection of a BRCA mutation on this test does indicate an increased risk, only a small percentage of Americans carry one of these three mutations and most BRCA mutations that increase an individual’s risk are not detected by this test,”1 he said.

The test analyzes DNA from a person’s saliva to identify these genetic mutations. A positive test result means that the person has 1 of these 3 mutations.

Be Aware of Potential Pitfalls

However, according to the FDA, this test “does not provide information on a person’s overall risk of developing any type of cancer. The use of the test carries significant risks if individuals use the test results without consulting a physician or genetic counselor.”1 Because many other mutations are not detected by this test, and there are more than 1,000 BRCA mutations, people should not interpret the test results to mean they are not at risk for cancer. Also, most cancers are not related to hereditary mutations; in fact, a very small percentage of cancers are linked to inherited (or genetic) mutations, so the test may create a false sense of confidence in a patient who receives a negative test result.

Consult with Your Doctor Before Ordering the Test

For these reasons, the FDA cautions, “It is important for patients to consult their health care professional who can help them understand how these factors impact their individual cancer risk and what they can do to modify that risk.”1 Although finding a BRCA genetic mutation tells women that they may be at risk for breast or ovarian cancer, and tells men they may be at risk for prostate cancer, Mr. St. Pierre cautioned people that they should not use the test instead of discussing any potential genetic risks with their doctor.

“The test should not be used as a substitute for seeing your doctor for cancer screenings or counseling on genetic and lifestyle factors that can increase or decrease cancer risk,”1 Mr. St. Pierre said.

According to information provided online on the 23andMe website (23andMe), the test costs $199 and can be ordered right on their website.

FDA Approvals, News & UpdatesLeukemiaLymphoma
FDA Approved Rylaze as Part of a Treatment Regimen for Young Patients with Leukemia or Lymphoma
In June 2021, the FDA approved Rylaze (asparaginase erwinia chrysanthemi [recombinant]-rywn), an asparagine-specific enzyme, to be used as part of a multi-drug chemotherapy regimen for patients older than 1 month with acute lymphoblastic leukemia or lymphoblastic lymphoma who are hypersensitive to asparaginase caused by E. coli infection.
Last modified: June 12, 2018