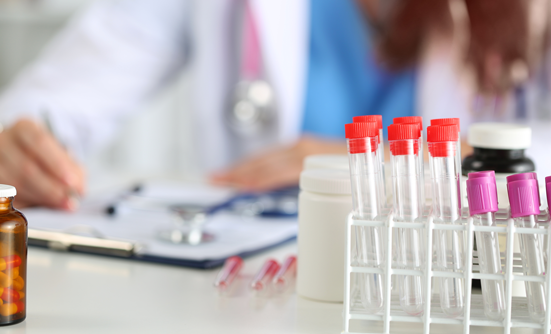 In recent years, new treatments for acute myeloid leukemia have improved outcomes. In 2017, 2 new drugs were approved for patients with this type of blood cancer linked to a specific biomarker.
May 2018 – Cancer Biomarkers and Molecular Testing
Meg Barbor, MPH

Until recently, the treatment of patients with acute myeloid leukemia (AML), a rapidly growing type of leukemia, a blood cancer, did not have specific treatments for any tumor markers, or biomarkers. Several targeted therapies that belong to a class of drugs called tyrosine kinase inhibitors (or TKIs) have been approved for different types of cancer, but not for AML. However, in recent years, researchers have begun to develop new treatments for AML and related biomarkers, and in 2017, 2 new drugs were approved for patients with AML and a specific biomarker.

The FDA approved Rydapt for use in combination with standard chemotherapy, based on results from a clinical trial showing that adding Rydapt to chemotherapy prolonged patients’ lives: the average survival with chemotherapy alone was about 25 months compared with 75 months with the addition of the FLT3 inhibitor, Rydapt.

Researchers have also identified other mutations associated with the FLT3 mutation, including ITD and TKD. The ITD mutation increases the risk that the cancer will return, and it reduces survival. By contrast, the TKD mutation is found in about 6% to 10% of patients with AML, but it does not seem to affect survival.

Rarely, a patient can have both biomarkers, the ITD mutation and the TKD mutation, which means worse outcomes than having 1 mutation.

According to Amanda Seddon, PharmD, BCOP, BCPS, Assistant Professor, Chicago College of Pharmacy, having FLT3 inhibitors has dramatically changed the treatment of patients with AML. With a new focus on biomarkers in AML, new FLT3 inhibitors are being developed.

“So, we do see some additional acquired mutations occurring that ultimately alter the conformational state, and weaken its binding affinity for FLT3 inhibitors,” Dr. Seddon said at the 2018 Hematology/Oncology Pharmacy Association meeting.

The second reason for treatment resistance is seen in the residue of the F691L mutation, as well as the D835 and Y842 mutations found in patients who receive treatment for AML.

“Gilteritinib and crenolanib are the 2 drugs that come to mind when we think of binding to the active conformational state,” she added. Resistance to FLT3 inhibitors also occurs through other mechanisms, and doctors are gradually gaining better understanding of all these developments as new drugs are being developed.

The FDA approval of Idhifa for the treatment of adults with relapsed AML and the IDH2 mutation was the first time a treatment was approved for patients with AML and this biomarker. As in the case of most new targeted therapies, Idhifa was approved with a “companion diagnostic test,” the RealTime IDH2 assay. This means that patients have to be tested with this assay to identify the IDH2 mutation before using Idhifa.

“Idhifa is a targeted therapy that fills an unmet need for patients with relapsed or refractory AML who have an IDH2 mutation,” said Richard Pazdur, MD, Director of the FDA’s Oncology Center of Excellence, in a press release. “The use of Idhifa was associated with a complete remission in some patients and a reduction in the need for both red cell and platelet transfusions,” he said.

In the study that led to the approval of Idhifa, the drug prolonged the life of many patients, as well as their quality of life, although like all AML treatments so far, it does not provide a cure.

What Does This Mean For Me?

For patients with AML, knowing whether their cancer is linked to a specific biomarker or mutation is becoming very important, with the approval of new treatments that directly target those mutations and are better able to stop the cancer from progressing. Current treatment guidelines also advise doctors to have patients tested for molecular changes (or mutations) that may already have treatments approved by the FDA. All patients with AML should at least be tested for FLT3 or IDH2 mutations.

“Going forward, ensuring that FLT3 is being tested in all of our patients with AML, especially those cytogenetically normal patients, is very important,” Dr. Seddon said.

She noted that doctors and other providers should strongly encourage their patients to participate in clinical trials to investigate new treatments for different types of mutations associated with AML in individual patients.

Patients should ask their care team whether their specific type of AML involves a biomarker for which a specific treatment is available. And because new cancer drugs can be rather expensive, doctors should help their patients to get access to these drugs, and make sure they have appropriate insurance coverage. Educating patients and all cancer care providers on these new drugs and their potential benefits and side effects is also important, Dr. Seddon emphasized. 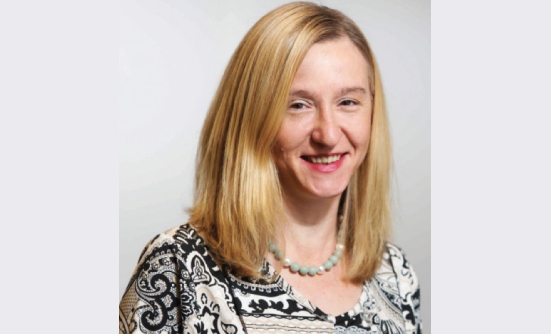