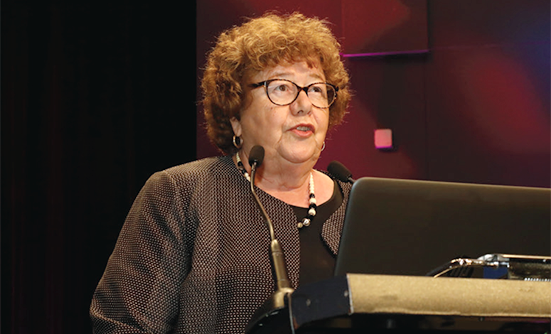 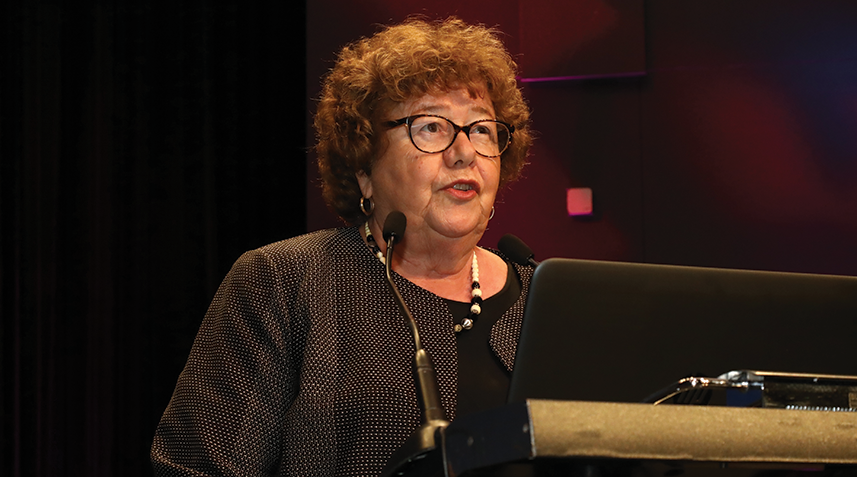 Advocacy usually begins with personal crisis and the need for support, but it eventually moves on to sharing experiences and information with others, speaking out in public forums, and working to influence change, suggested Musa Mayer, breast cancer survivor and advocate, at the recent European Society for Medical Oncology International Consensus Conference for Advanced Breast Cancer in Lisbon, Portugal, where she received the ABC4 Award in recognition of her 25 years of advocacy on behalf of patients with advanced breast cancer.

“Advocacy is about finding our voices and telling our stories,” Ms. Mayer said. Her journey began with a diagnosis of breast cancer. “In addition to medical information, what I hungered for at the time of my diagnosis were stories from women like me, to learn from, to feel less alone,” she said.

After her treatment ended, she joined a support group with 8 other women who had undergone surgery, were receiving chemotherapy, and were coping with the fear of cancer recurrence (return). They continued to meet after the hospital stopped hosting their meetings, even as several women in the group had cancer recurrence or died.

“Although I remained with ‘no evidence of disease,’ I couldn’t make myself look away or leave these women who meant so much to me. I knew I had to do something,” Ms. Mayer said. She joined an online community of more than 1,000 patients with breast cancer across the United States and Canada in 1994. Convinced of the healing process that writing offered, she began to give writing workshops for patients with cancer.

“The world didn’t need another guide for early-stage breast cancer,” Ms. Mayer said. Instead, she interviewed 25 women and 1 man with advanced or metastatic breast cancer (as well as many of their partners and husbands), and collected nearly 1,000 pages of responses. The guide was published in 1997; it was first called “Holding Tight, Letting Go” but was later changed to “Advanced Breast Cancer.”

According to Ms. Mayer, support groups that mix patients with early and metastatic cancer present challenges for patients. Many patients living with metastatic breast cancer find it difficult to speak openly in a mixed group. What people with early-stage disease are dealing with is very different from the experience of patients with advanced cancer.

An online community dedicated to metastatic breast cancer was formed in 2000 and became the basis of Ms. Mayer’s advocacy work. Today there are similar online communities. Round-the-clock communication makes these groups suited to meet the peer support and information needs of people living with metastatic cancers, whose symptoms may keep them housebound or who live in remote areas.

Despite the concerns that many in the healthcare community express, these online communities, even when not moderated by a professional person, tend to attract experienced and knowledgeable patients and family members who are eager to share what they have learned, and to correct misinformation, according to Ms. Mayer.

Why Good Evidence Is So Crucial

According to Ms. Mayer, early breast cancer advocacy focused on awareness, early detection, and survivorship, bringing a once shameful disease into public discourse. “As the movement matured, however, breast cancer advocacy in the United States evolved into many colors, not all of them pink, not all of them polite, as women reacted to what they saw as pink marketing and a complacent acceptance of the status quo,” she said.

Cancer treatment, she said, should be based on high-quality evidence. “I learned this lesson the hard way in the 1990s, through the tragedy of high-dose chemotherapy with bone marrow transplant in advanced breast cancer. Like most people, I assumed that these top cancer hospitals and oncologists were doing noble work in transplant units, offering desperate patients their best chance at long-term remission and survival.”

But when 2 of the women in her support group died from the side effects of transplant, she started reading the research and was shocked to learn that this common treatment in advanced breast cancer was based on inconclusive evidence in early clinical trials. In subsequent years, large clinical trials demonstrated that transplant offered no survival benefit in advanced breast cancer.

Between 1985 and 1998, more than 30,000 American women with breast cancer had bone marrow transplants, and many had significant side effects, including many deaths.

For 12 years, Ms. Mayer worked for the FDA as a patient representative on advisory committees, learning about drug development, and discussing clinical evidence and regulatory policy, along with oncologists and biostatisticians.

“In the open public hearings, desperate patients often told their stories and pleaded for the approval of new treatments. At times there were demonstrations and angry threats. The press would become involved,” she said. “In today’s political climate, with the perennial tension between access and evidence, it seems to be tipping against regulation, with the success of right-to-try legislation clearing the way for dying patients to use investigational drugs after only phase 1 trials.”

But in her experience, this controversy didn’t concern the vast majority of patients and families living with metastatic breast cancer. They worried most about their loved ones and their limited resources. They wanted the best treatments, backed up by solid research, and physicians who were compassionate enough to listen to what mattered to patients.

Although working with 1 patient at a time was satisfying, the voices of patients with metastatic breast cancer were still not being heard outside of a few online communities, she said. The resistance was especially strong in the breast cancer community.

In 2005, in collaboration with the Living Beyond Breast Cancer organization, Ms. Mayer developed the first comprehensive online patient needs assessment survey, and within 1 month, 618 patients completed it. The patients’ responses showed that they looked for information about metastatic breast cancer, about symptoms and side effects, and how patients can help one another; it also showed that some patients needed more professional help. After the group published their findings in a paper called “Silent Voices,” national organizations began offering services to patients with metastatic breast cancer.

At the same time, people with metastatic breast cancer were themselves organizing and speaking out. In 2013 the Metastatic Breast Cancer Alliance was formed, and as of 2017, the group consists of 32 nonprofit organizations, 11 pharmaceutical companies, and 14 individual patient advocates.

Ms. Mayer’s experience has taught her that 1 person can make a difference—1 issue and 1 patient at a time.

“With the Alliance and the strong voices of patient-driven advocacy groups, there’s a renewed commitment on the part of researchers and clinicians. I feel confident that there is now a critical mass of like-minded people who will propel this work forward,” she said.

“When I began this work, metastatic breast cancer wasn’t discussed in the breast cancer support community,” she said. “Fear prevailed. In hushed voices and memorial funds, those who had died were commemorated. But for those living with metastatic breast cancer, there were few resources of any kind. Too often they felt shunned.” Ms. Mayer considers herself privileged to have witnessed the birth of a movement; she is certain its momentum will not be slowed.

“These voices will not be silenced, and their numbers will be counted. In the clinics of the world, they will be listened to, and given the treatment information and the respect they deserve,” she said. “I know that through their strength and passion, they will keep speaking and keep telling us their stories. And in their stories, we will all find the mirror of our common humanity.”

Get the 2020 Patient Guide
to Cancer Support Services
for free in your inbox! 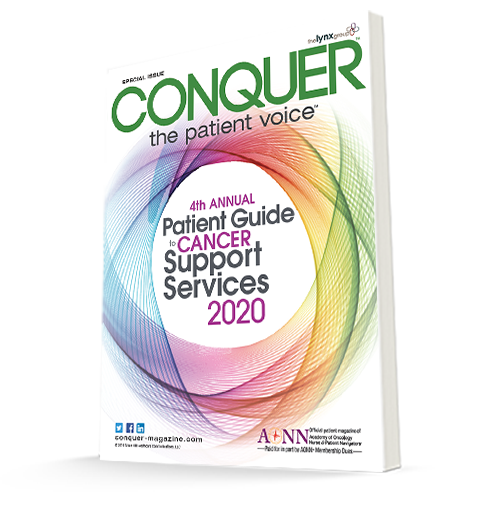