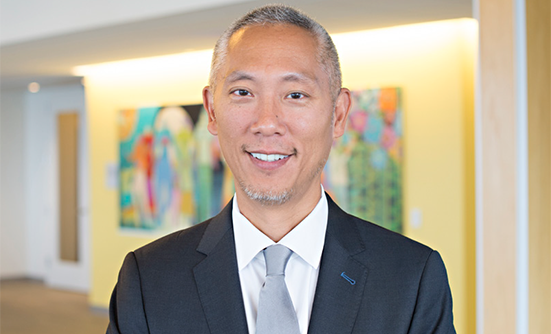 “Almost anyone who is a candidate for lung surgery is generally a candidate for minimally invasive surgery,” says Richard Chang, MD, FACS. Newer types of surgery are becoming available for patients with lung cancer that has not spread to other organs.
April 2018 Vol 4 No 2
Kristen Chanley

Surgery provides the best chance to cure early-stage lung cancer and plays an important role for patients who have been diagnosed with early-stage non–small-cell lung cancer (NSCLC), the most common type of lung cancer. Newer types of surgery are becoming available for patients with lung cancer that has not spread to other organs, allowing patients to have surgery with less pain and with a quicker recovery period.

According to the American Society of Clinical Oncology, the most effective type of lung cancer procedure is called lobectomy, in which the portion (or lobe) of the lung that has cancer is removed and detached from the heart.1 A lobectomy is the standard surgical procedure for patients diagnosed with stage I or II NSCLC. Lobectomy can also play a role for patients with stage III NSCLC, and is usually used in combination with chemotherapy or radiation therapy.1 There are several surgical techniques used to reach the lungs when performing a lobectomy. 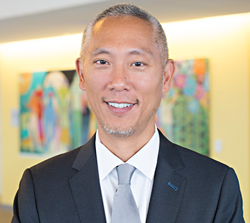 According to Richard Chang, MD, FACS, Chief of Thoracic Surgery at Lehigh Valley Health Network, in Pennsylvania, there are 3 techniques or types of surgery currently used to perform a lobectomy in lung cancer, including thoracotomy, video-assisted thoracoscopic surgery (or VATS), and robotic surgery. In 2010, Dr. Chang performed one of the country’s first completely robotic lobectomies.

In thoracotomy, the surgeon performs a large, 5- to 10-inch incision (cut) in the chest and back, through which the surgeon operates to spread the patient’s ribs and access the chest cavity, and lungs to get to the tumor.

“A thoracotomy is a valuable and effective operation,” Dr. Chang says, “but the problem is that it’s associated with a fair amount of pain, and the recovery is longer, because you have to cut through the muscles in the patient’s back.”

The other 2 options, video-assisted surgery and robotic surgery, are both minimally invasive procedures, meaning that they require fewer incisions (or cuts in the chest), which helps to reduce pain and the trauma to the patient’s body, making recovery easier.

“Almost anyone who is a candidate for lung surgery is generally a candidate for minimally invasive surgery,” Dr. Chang says. “If a patient is operable to begin with, as long as they can undergo a standard operation, they would be able to undergo VATS or robotic surgery.”

However, not all lung cancers can be removed by minimally invasive surgery. These techniques may not be a good option for patients with a large tumor (larger than 7 cm), a tumor that grows into the chest wall, or a tumor that involves the main bronchial tubes.2 In addition, these robotic techniques are not available everywhere.

“There are a few exceptions where robotics is not that much of an advantage,” Dr. Chang says. “For instance, if the tumor is invading the chest wall, and you have to remove a part of the chest wall, the patient would need an open operation. But outside of these exceptions, there is really no difference oncologically, and there’s also no difference in risk.”

The Benefits of Minimally Invasive Surgery

Minimally invasive techniques can offer patients with early-stage lung cancer benefits, such as fewer incisions, short hospital stay, and less pain from surgery. Unlike the longer, single incision used during the traditional thoracotomy, video-assisted or robotic surgery involves a few small cuts in the ribs. A video camera is inserted into one of the incisions, allowing the surgeon full view of the chest cavity.

“You can do the same cancer operation without making a big cut,” Dr. Chang says. “These small incisions in the ribs decrease the amount of pain associated with this operation, and it does not necessitate cutting through any of the muscles, or spreading of the ribs. Therefore, the recovery to normal activities is much quicker.” A swifter recovery also means less time in the hospital, with patients typically requiring a 4- to 6-day hospital stay after a thoracotomy compared with 1 to 4 days after minimally invasive surgery.

Although video-assisted surgery and robotic surgery share the same benefits in terms of the patient’s experience, there are major differences in precision between these 2 procedures. During video-assisted surgery, the surgeon operates through the incisions, using very long instruments, while referencing the 2D magnified transmission of the chest cavity offered by the inserted video camera.

“Because of the instrumentation used in robotic surgery, surgeons are able to do a far more precise operation and attain a better lymph-node status and do a better dissection,” Dr. Chang says.

The ultimate goal with any lobectomy is to remove the cancer in the lungs. When deciding which technique is the right choice for a patient, trusting the patient’s multidisciplinary team is recommended. The decision whether a surgical procedure is appropriate depends on the patient’s specific diagnosis, overall health, and the availability of an experienced surgeon. Although minimally invasive surgery involves powerful technology and can carry great benefits to the patient, it is ultimately a tool. The success of any surgery hinges on the skill and experience of the surgeon.