Just Ask Frank Sierawski: Anybody with Lungs Can Get Lung Cancer

Frank Sierawski had never smoked and had no family or personal history of lung problems, but what started out as a distressing cough ended up being lung cancer.
November 2020 – Lung Cancer
Chase Doyle 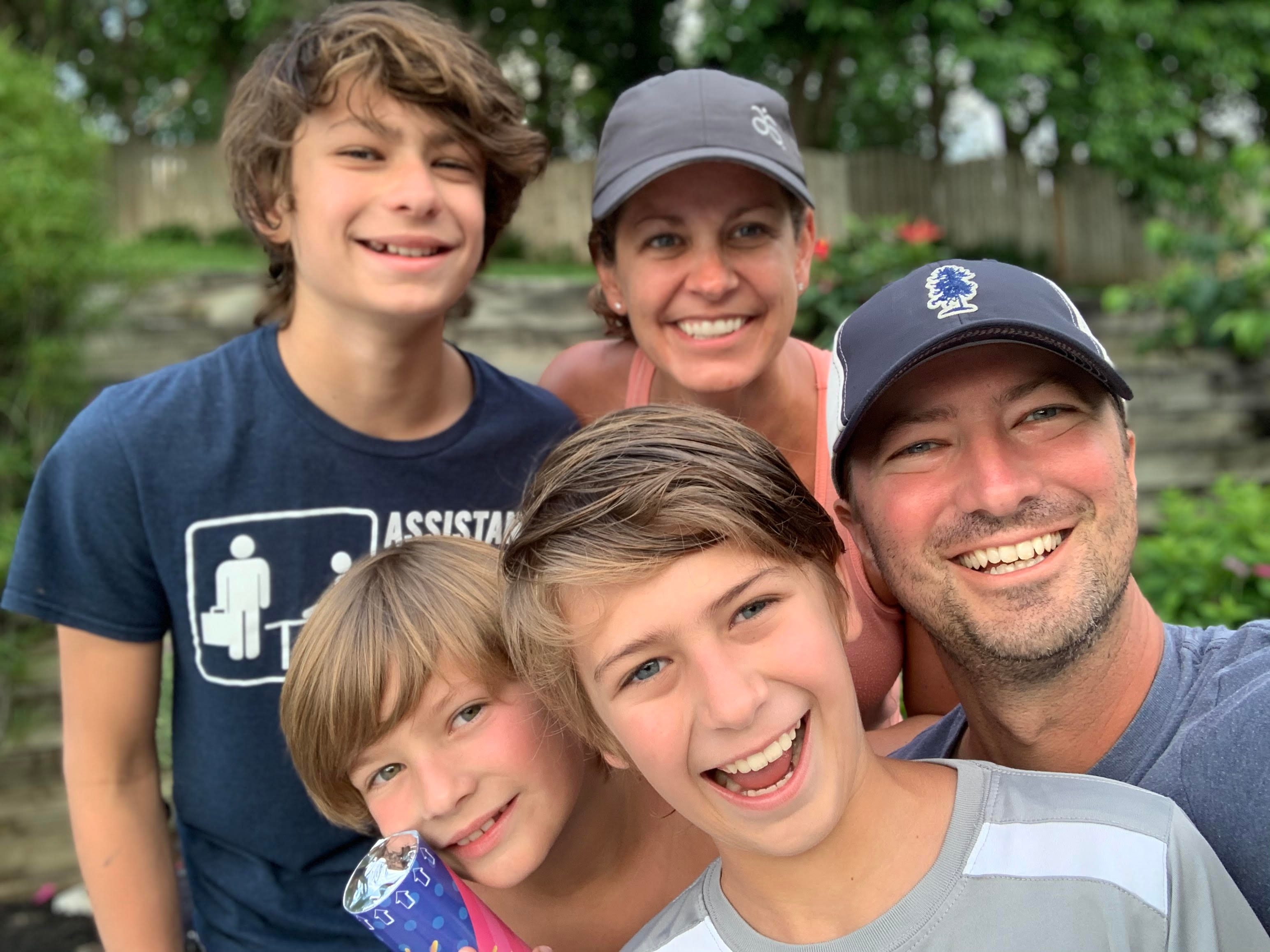 Frank with his family.

Despite a spotless medical history, Frank Sierawski, a father of 3 in Omaha, Nebraska, was diagnosed with stage IV metastatic lung cancer, which was driven by a genetic mutation. That mutation was also the key to the success of his treatment, said Frank, who spoke at the October 2020 conference of the International Association for the Study of Lung Cancer (IASLC, www.iaslc.org).

A Lingering Cough, a Misdiagnosis

It started with a nasty cough in November 2013, Frank said in an interview after the IASLC conference. An otherwise healthy 34-year-old man, Frank didn’t give it much thought. It was flu season after all, and almost everyone in his Omaha office had some sort of a cold. When the cough continued into February, however, he finally sought care.

“I had good healthcare at my employer, so I decided to get my free physical,” said Frank, an accountant by trade. After the physical exam, the doctor ordered a chest x-ray, which showed a partially collapsed lung.

Frank had never smoked and had no family or personal history of lung problems. The doctor suspected a mild case of pneumonia. He gave Frank some antibiotics and an inhaler, neither of which helped.

Four weeks later, his cough worsening, Frank was referred to a pulmonologist. After having a test for asthma and a chest CT scan, he had a bronchoscopy, which showed that the reason for his symptoms was a large mass in his lung. The pulmonologist decided not to biopsy (used to confirm cancer) the mass, because he was convinced that it was a carcinoid tumor—an uncommon and slow-growing type of lung cancer.

Luckily, Frank shared his story with his friends, one of whom worked at the Mayo Clinic in Rochester, Minnesota. That friend suggested that he should have a more in-depth diagnosis, and in June 2014, after some convincing, Frank agreed to have a second opinion.

At the Mayo Clinic, Frank had a series of imaging tests, including a CT scan, a PET scan, and 2 more bronchoscopies. The final bronchoscopy was to debulk (remove) the tumor, which cleared up his breathing. After a week, Frank left the Mayo Clinic nearly symptom-free. But soon after he received the diagnosis from the Mayo Clinic: he had stage IV non–small-cell adenocarcinoma of the lung, or NSCLC.

“The cancer had metastasized to my ribs and my vertebrae, as well as some lymph nodes,” said Frank. “It was right around the time of my 35th birthday.” 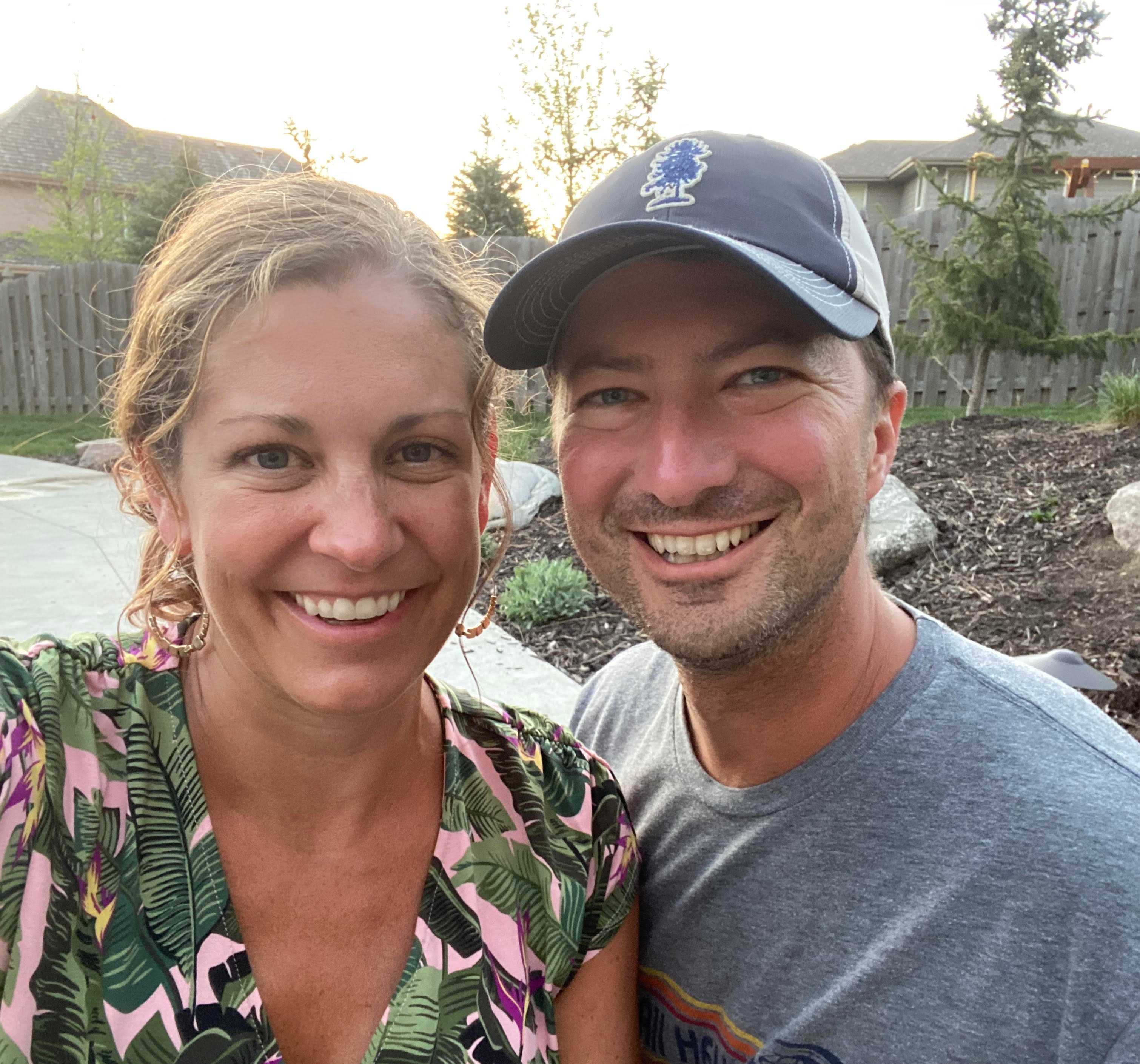 Frank with his wife.

Once the diagnosis was established, Frank had a genetic test to see if any genetic mutation was involved in his cancer, which would be important to decide on the correct treatment. Several genetic mutations are now linked to lung cancer and can be the reason for lung cancer in people who have never smoked and in young people.

Indeed, the genetic test showed that he had an ALK gene mutation, a genomic mutation that is linked to a high risk of lung cancer. Although the ALK mutation was the cause of his cancer, it also meant that he was a candidate to receive a targeted therapy (an ALK inhibitor) that is designed to stop the action of the ALK mutation, which, in turn, helps to stop the growth of cancer cells.

In the past decade, an increasing number of targeted therapies have become available for the treatment of people with non–small-cell lung cancer and ALK mutation.

“Genetic testing was a game-changer for me,” said Frank. “It meant that I could avoid side effects of traditional chemotherapies and continue my daily routine. I took one pill in the morning and another at night.”

Frank received the first-generation ALK inhibitor Xalkori (crizotinib). After 9 months of using Xalkori, the sites to which the cancer had spread had cleared of cancer, and the primary tumor in the lungs was stable. He and his doctors decided to try for a cure, by surgically removing the tumor with a lobectomy of the lower left lobe.

“My doctor always said we were going for a cure,” said Frank. “Just the fact that he wasn’t afraid to use the word ‘cure’ with a patient with stage IV lung cancer gave us so much hope, and that has shaped how we’ve approached treatment ever since.”

The combination of a targeted therapy and lobectomy had done its job, according to Frank. In time, however, he had brain metastases, meaning the cancer had spread to the brain. “The Achilles heel of crizotinib is that it doesn’t protect the brain,” Frank said.

“It was like somebody sprinkled poppy seeds on the bagel of my brain,” Frank recalled.

Frank and his cancer team decided to switch to a newer, second-generation ALK inhibitor, Alecensa (alectinib). After 3 months of receiving Alecensa, the “poppy seeds” were gone, and the 4-millimeter tumor had shrunk to 2 millimeters. Three months after that, the tumor was barely 1 millimeter. And 3 months later, the tumor was invisible. That was in the middle of 2017, and he has been cancer-free since then.

“I’ve been disease free for over 3 years now. We have always had a hopeful mindset. We have always expected the best. It helps to get to have an aggressive care team who are willing to take measured risks and work on your behalf to push for the best outcomes,” Frank said.

After his successful outcome, Frank has dedicated his time to help other people affected by lung cancer. He volunteers with the Omaha chapter of the American Lung Association, as well as with LUNGevity, a national lung cancer patient advocacy nonprofit organization.

Frank stresses the advances in research and treatment of lung cancer since his diagnosis in 2014. “It’s been an exciting time to have lung cancer,” he said. “In the last 5 years alone, the number of [drug] approvals has skyrocketed.”

In June 2014, he explained, Xalkori was the go-to targeted therapy for lung cancer and ALK mutation. In December 2015, Alecensa was approved as the second-generation ALK inhibitor. Since then, another ALK inhibitor, Alunbrig (brigatinib), was approved in 2017, and new ALK inhibitors are in development.

“I was lucky to have the ALK mutation, but the value in genetic testing is a huge game-changer for so many patients with cancer,” Frank said. “If you haven’t had your biomarker testing, you’ve got to get that done.”

In addition, Frank explained, other targeted therapies are available for different gene mutations that are linked to lung cancer. For example, Tarceva (erlotinib) and the more recently approved Tagrisso (osimertinib) are 2 EGFR inhibitors that are used for patients with lung cancer and EGFR mutations.

Other drugs targeting specific gene mutations linked to lung cancer have recently been approved, and more are being developed to target the variety of gene mutations involved in the development of lung cancer.

In addition, new immunotherapies have changed the outcomes for patients with lung cancer that is not linked to a genomic mutation, according to Frank.

The Stigma of Lung Cancer

Frank is also helping to address the stigma surrounding lung cancer. Although more than 200,000 patients are diagnosed with lung cancer each year in the United States, and this disease is killing more Americans than the next 3 most common types of cancer combined, lung cancer research remains seriously underfunded, in part because of the stigma of smoking, according to Frank.

“If there was ever an example of someone who never smoked and never thought they would get lung cancer, it’s me,” he said. “But the truth is: anybody who has lungs can get lung cancer.”

“It’s not that smoking doesn’t cause lung cancer; it’s 100% proved to cause cancer. But smoking rates have decreased dramatically in the past 20 years, and people are still getting this disease. We need to start asking why,” Frank emphasized.

In addition, as part of his advocacy work, Frank talks with patients about their insurance coverage and financial problems.

“My therapy lists for $16,000 per month, but it only costs me $5 out of pocket. Some people have had to pay a $2,800-per-month copay for the same treatment. That’s a mortgage payment on a really nice house. That’s a lot of other things besides some pills to swallow every night just to live longer,” Frank said.

According to Frank, because they do not usually require a statement of health, choosing group life insurance may be an option for many patients. And for those who already have term life insurance, he said, taking out an “accelerated benefit” could be a sound financial strategy.

“Newly diagnosed folks are swimming in it,” Frank said. “These are the last things they want to think about, but these things could be beneficial for a thousand reasons.”

Lung CancerFDA Approvals, News & Updates
FDA Approves Tepmetko, New Targeted Therapy, for Patients with Metastatic Lung Cancer and MET Exon 14 Alterations
In February 2021, the FDA approved Tepmetko (tepotinib), a new oral targeted therapy, for the treatment of all adults with metastatic non–small-cell lung cancer and MET exon 14 alterations. Tepmetko is the second MET inhibitor that has been approved by the FDA.

FDA Approvals, News & UpdatesLung Cancer
Tagrisso Approved as Adjuvant Therapy for Patients with Lung Cancer and EGFR Mutations
In December 2020, the FDA approved Tagrisso (osimertinib) for adjuvant therapy (continued therapy to prevent cancer recurrence) after surgical removal of the tumor, in patients with non–small-cell lung cancer and EGFR exon 19 deletions or exon 21 L858R mutations. Tagrisso was previously approved for the treatment of other types of lung cancer.
Last modified: December 10, 2020