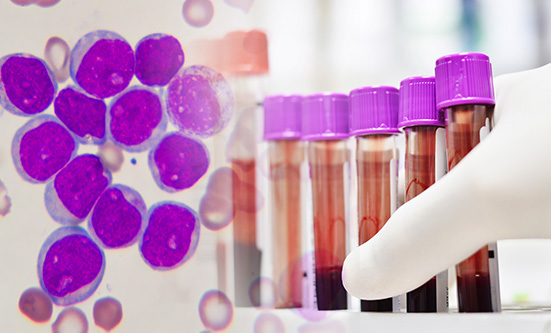 Cytogenetic testing is used to identify genomic aberrations in patients with chronic lymphocytic leukemia (CLL). It estimates a patient’s outcomes and can predict response to certain therapies, and therefore is recommended for all patients with CLL at diagnosis.
Web Exclusives – December 9, 2019

With an increasing array of treatments available for patients with chronic lymphocytic leukemia (CLL)/small lymphocytic lymphoma (SLL), the use of cytogenetic testing has become increasingly useful to predict a patient’s likelihood of disease progression and to guide the selection of treatment.

The course of CLL is highly variable, with some patients having an indolent form of the disease, and others, a rapidly progressing form of CLL. The variability has an important impact on approach to treatment and the length of survival from diagnosis. Therefore, cytogenetic testing is recommended for all patients with newly diagnosed CLL.

Cytogenetic testing is standard to identify genomic aberrations that can determine the particular disease course, and therefore, a patient’s outcome. Cytogenetic testing involves examination of chromosomes under a microscope to determine their structure and number. Some of the techniques used in cytogenetics are fluorescence in situ hybridization (FISH), array comparative genomic hybridization (CGH), and karyotyping.

FISH is a technique that uses fluorescently labeled probes to locate the positions of specific DNA sequences on chromosomes. Array CGH uses slides arrayed with small segments of DNA as targets to assess for copy number changes in chromosomes. Karyotyping refers to the examination of dividing cells to look for missing or damaged chromosomes.

A deletion in 11q has also been associated with more rapid disease progression and worse survival in younger patients.

A complex karyotype, defined as having 3 or more chromosomal abnormalities as detected by cytogenetic testing, predicts worse survival for those who receive treatment with regimens that contain ibrutinib.

A FISH test may also show a trisomy 12 mutation, which is an extra chromosome 12. This is considered to put CLL patients at intermediate risk for an unfavorable outcome. Another predictor of outcome is the mutation status of immunoglobulin heavy chain region (IgHV), which is an antibody normally composed of 2 large (heavy) chains and 2 smaller (light) chains. It is determined by a molecular technique, either polymerase chain reaction or next-generation sequencing. With unmutated IgHV, lymphocytes do not have the ability to make normal, functioning heavy chains.

In most cases, trisomy 12 occurs together with negative (unmutated) IgHV, which is associated with worse survival, a shorter time until treatment is needed, and a less durable response to chemotherapy compared with mutated IgHV. A complex karyotype is also associated with unmutated IgHV.

In the selection of treatment for CLL/SLL, patients with unfavorable risk should be considered for enrollment into a clinical trial of newer CLL treatments.