Public Health Professional Turned Patient: The Lives We Save May Be Our Own

Sheree Williams, PhD, is a health scientist with the CDC, but her background in public health did not prepare her for the unique challenges she faced as a black woman diagnosed with breast cancer, highlighting the social determinants of health.
April 2020 Vol 6 No 2 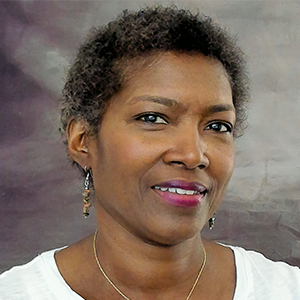 Shortly after leaving Ethiopia, my friend April and I arrived at the Bwindi Impenetrable Forest National Park in Uganda, Africa, just in time for the hike briefing by the Ugandan park rangers. They were briefing us for our 2- to 4-hour gorilla trek through the highlands of Uganda to see the only silverback gorillas remaining on the planet. I sat listening to the orientation, smiling intermittently, at times shaking my head in affirmation. I was living my best life! 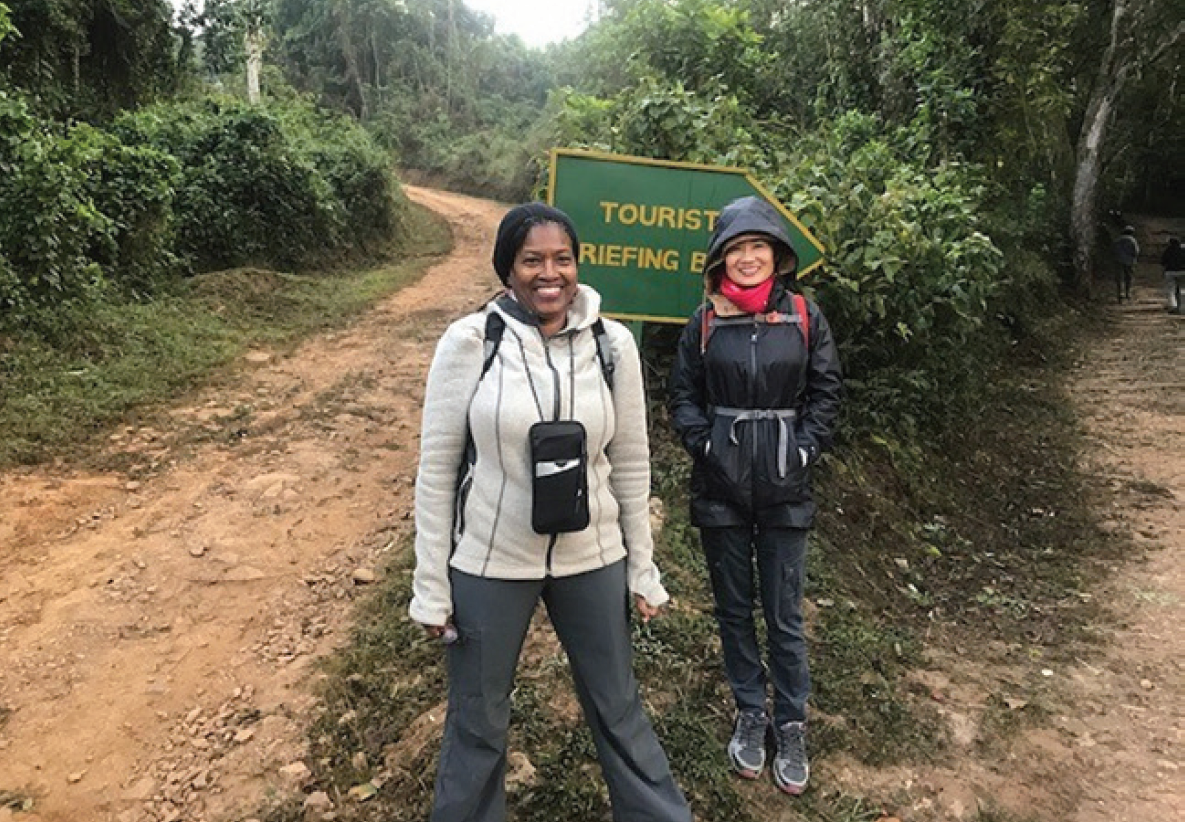 Sheree and April at the trail head of Bwindi Impenetrable National Park in Uganda, 2017.

A week after returning from Africa, in mid-July 2017, I spotted a small, bright red, rash-looking spot on my right breast. Underneath was a nodule that was clearly protruding. I brushed it off as a rash. Maybe I had been bitten by a bug as I was trekking through the bush in Uganda, I thought. The following week, the lump became more painful to the touch. After another week or so of pain and swelling, I decided to make an appointment to see a surgical oncologist.

After introducing herself and viewing my swollen breast from various angles, the surgical oncologist pronounced, “I can’t be 100% sure, but I can almost assure you that you are definitely looking at a cancer. Let’s biopsy this now,” she said with a sense of urgency and compassion.

Before the biopsy, I was led into the waiting area to have a mammogram. At age 54, this was my first mammogram, ever. One other woman was waiting along with me, and she appeared calm as she leafed through the magazine in the waiting room.

As I sat there, I was feeling guilty for not having had my screening years earlier. I reminded myself that I knew why I hadn’t been screened: I didn’t want to know. With all the other stressors in my life, I couldn’t bear dealing with my own care and have my healthcare consume me. I chose not to be screened.

Two days later, the surgical oncologist went over the biopsy report with me. The main thing I remember is not what I heard, but what I read: “IMPRESSION: very suspicious for malignancy.” It has been almost 3 years since I returned from Africa and was diagnosed with aggressive, locally advanced, metaplastic triple- negative breast cancer. Metaplastic breast cancer is a rare cancer that makes up only 1% of breast cancers diagnosed. It is usually resistant to chemotherapy and is often negative for estrogen receptor, progesterone receptor, and HER2-neu, hence the “triple-negative” type of breast cancer.

Cancer and the Workplace

I was away from my office for 6 months while having surgery, chemotherapy, and then radiation. When I returned to the office after an extended sick leave, my supervisor told me that the office was not able to say so much as “get well soon,” because if they did, it would go against the “workplace policy.”

As the weeks and months went on, I realized that the information about the policy was misstated to allow my supervisor to proffer a narrative that painted me as an ineffective worker, which would justify any action taken against me, including firing. My supervisor believed that I was feigning my illness.

Fortunately, I was able to keep my job by transferring to another team, where I worked with a remarkable, empathetic supervisor. From my experience as a black woman living with breast cancer, I can better understand the complexity of the usual categories of behavioral, hereditary, and social factors, and the need to include social- racial issues as risk factors for cancer.

The major issue with many behaviors associated with breast cancer—such as cigarette smoking, alcohol, coffee, dairy, and sugar consumption—is that, except for cigarette smoking, there is no single behavioral risk factor for breast cancer. In fact, most women engage in all these “risk” behaviors to some degree. Although we should not minimize the role of behavioral factors, such as diet and exercise, individual risk factors and behaviors are just a small piece of a large and complex puzzle that increases a woman’s likelihood of having breast cancer.

For example, I have been an avid runner for much of my life, drank wine only occasionally, and maintained a moderate weight, even if at times my body mass index fell within the “overweight range.” It is doubtful that any one of the known risk factors alone caused my breast cancer.

Broadly speaking, social determinants of health are the conditions in which people live, grow, age, and work that are closely linked to the distribution of money, power, and resources.

I once had to walk to my radiation appointment because my car broke down. It was above 90 degrees outside. I walked, because if I had taken public transportation, I would not have arrived at my appointment on time. By the time I arrived at the clinic, I was hot and tired. However, I was able to make it to my last appointment, and to celebrate with radiation technologists when I finished my 20th radiation treatment without any delays.

Later it dawned on me that some people walk to their doctor’s appointments on a regular basis, because it is their only option. As someone who is surviving breast cancer, and who has been a behavioral researcher for most of her professional life, I’ve realized that the public health community is minimizing the role of structural determinants and sociopsychological risk factors that are largely connected to the social conditions in which we live.

When it comes to breast cancer diagnosis, treatment, and survival, it is crucial that public health providers begin to examine more closely the psychosocial and social contexts of women’s lives, particularly of African- American women. A substantial body of literature has demonstrated the adverse health effects of chronic exposure to racial discrimination. Although racial discrimination has increasingly been recognized as a significant contributor to health disparity, race-related stress is largely absent in the field of breast cancer research.

Had I not been exposed to the day-in and day-out toxic stressors over the course of the 2 years before my diagnosis, would my body have succumbed to breast cancer? It is difficult to answer this question, because work-related variables, particularly those related to institutional racism, are largely absent from breast cancer research. This question, however, is relevant to my breast cancer journey and should be considered in my diagnosis, treatment, and survival.

In the past, I viewed breast cancer through the eyes of PowerPoint presentations, intellectual discussions, and professional conferences with experts reporting on one “behavioral risk factor” after another. Now, survival for me is up close and personal.

I now understand that surviving breast cancer is not only about eating nutritious foods, maintaining a healthy weight, and exercising daily. It is also about being able to get to appointments after you’ve been diagnosed; being able to pay medical and utility bills; being able to afford a second (or third) opinion, or the ability to take time off work to see a doctor; and being employed in a non-oppressive work environment, where supervisors are sensitive to your medical condition and are not harassing you when you’re ill.

One of the coping strategies that I have used during my diagnosis and treatment over the past 2 years is “gratitude.” I am grateful to live only a 5-minute drive from the most amazing radiation and medical oncologists. I am fortunate to be able to afford my medication; to be employed full-time and to have health insurance. I am most appreciative to have been approved for an immunotherapy drug that is the product of recent ground-breaking research that won the Nobel Prize only a year after my diagnosis.

Even still, until public health professionals begin to develop effective interventions designed to affect the psychosocial and social structural determinants, breast cancer mortality rate among African-American women will continue to be 42% higher than among other ethnic/racial groups.

This gap in mortality rate is occurring even when breast cancer screening—which can lead to early detection—among African Americans has increased. This is a conundrum that is likely explained by unmeasured differences associated with the social structural factors between different groups.

How I acquired breast cancer is likely based on a myriad of factors— biological, social, environmental, and behavioral. It’s time for public health professionals to devote as much attention to research and intervention on social, environmental, and economic conditions as it does to behavioral and biological risk factors. The life we save may be our own.

Many cancer doctors will tell you not to have coffee or sushi when you are pregnant, but what about cancer treatment? When Jamie Ledezma was wrapping up the first trimester of her first (and only) pregnancy, she was diagnosed with breast cancer.

Patient Stories
Learning I Had Lynch Syndrome Helped Save My Life
By Wenora Y. Johnson

Humor & CancerPatient Stories
Spreading Fun and Games
By Rex Jones
Once you have been handed a cancer diagnosis, everything else in­evitably changes. In a very real sense, your entire life gets a complete overhaul, whether you want it or not. Some changes are for the better, others are less favorable, but life simply won’t be the same again.
Last modified: May 20, 2020