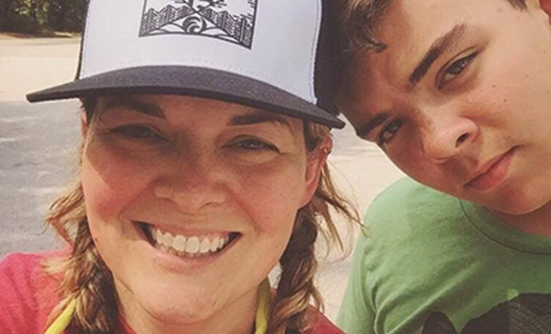 For Erika Brooks, it took some time to adjust to what it means to have an incurable cancer. She says, “at first, I kept thinking it was a death sentence.” Eventually, she came to see her cancer in a different light.
August 2019 Vol 5 No 4
Erika Brooks
Richmond, Virginia

I keep my cancer experience mostly tucked away. When you have an incurable form of cancer as I do, the idea of dying is always in the back of your mind. I don’t tap into it very often. It’s hard to go there in general, and doubly hard when I think about my son.

My son was 10 years old when I was diagnosed with follicular lymphoma at age 35. I had mostly been raising him as a single mom, and I never thought that there was a possibility I wouldn’t be there for him. I felt invincible. Even though my cancer was treatable, the clock started ticking. My life diagnosis came with a life expectancy of a 10-year shelf life. That’s fantastic, because some people don’t get that. 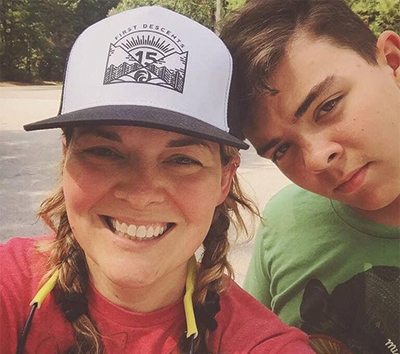 Me with my son, James.

I thought I was going to die. I thought he was going to leave me because of my diagnosis. There’s stigma around dating single parents, and I figured bringing a cancer diagnosis into our relationship would be too much for him. So, I gave him a free pass to leave, and told him it was cool if he did go, even though I really wanted him to stay.

He just looked at me as if I were crazy, which he does all the time now anyway, and said, “What are you talking about? No.” There has never been a moment too big or too stressful for him when he couldn’t deal with me having cancer. In short order, we went from the place in dating where you don’t want to use the bathroom in the same place, to me needing him to carry me there, because I was so sick from the treatments.

Side Effects, But I Kept My Hair

Unlike many people, I kept my hair during treatment, which came with pros and cons. On the pro side, I didn’t look sick, which helped to normalize things for my son; I could tell him I was feeling fine, and we would go to the movies and do additional normal mom–son stuff. I also didn’t get a gob of attention from people who felt sorry for me.

On the con side, there were times when I needed a gob of that attention back, when I was struggling. People must have thought that the treatments were super easy. 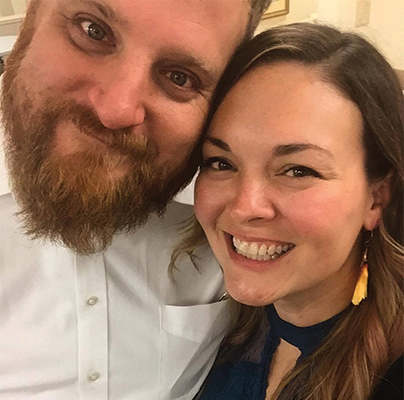 Me with my husband, Matthew.

It took some time to adjust to what it means to have an incurable cancer. At first, I kept thinking it was a death sentence. Eventually, I came to see my cancer in a different light, especially after the cancer relapsed (came back) in 2016, which was 2 years after the first treatment ended. Follicular lymphoma is a type of cancer that is not going away: I just hope it’s not going to kill me.

Now I think of cancer as a “life sentence”, which sounds like a Hallmark card. For all I know, I may only have a certain amount of time left, so I think about what I can do with that time. I take that energy to fundraise and get involved with nonprofit organizations I care about.

I got involved with organizations that do research on blood cancers, like follicular lymphoma, so that I may, one day, benefit from that research.

No matter how much energy I put forth in living my life, the more serious underbelly to cancer creeps in. I had been working at a bank for my entire career, and I had never paid attention to my benefits package. Who needs to pay attention to their life insurance policy?

But then I did! When I started filling out the paperwork about who my beneficiary would be—my son—I realized he might need this if I’m no longer here because of cancer. That was a hard moment to process.

It’s a tricky balance to be a caregiver (to my son) and needing care myself. I tried to protect him by keeping his life normal, and then I’d be resting and regrouping when he wasn’t home. Therapy helped us to have conversations about what I could and couldn’t do for him, and how cancer was going to affect our lives.

When the cancer relapsed 3 years earlier than what my doctors had hoped for, I didn’t want to tell my son. But when I sat down and explained things to him, he took it all in stride. My son has got a good head on his shoulders, but of course I still wish I could spare him all this.

This Is My Forever

I’m on a watch-and-wait ­protocol now. I have 8 lymph node spots around my collarbone, which are all growing and spreading at a slow rate. I had 4 infusions of Rituxan last fall that shaved off a few millimeters of the growth, but I know that the cancer will just keep coming back.

The feelings about my own mortality stay on the back burner. It’s probably unhealthy not to release some of them, and I was able to turn my filter off for a short time at a First Descents kayaking trip in 2017.

I didn’t plan on talking much about my fears, but as soon as we sat down for the first campfire, there was some ugly, ugly crying. I recognize that those feelings are always there, but it doesn’t do me any good to tap into them.

My life will always feature multiple trips to the doctor, multiple CT scans, and eventually more treatment. Some days I am nauseous, some days I am tired. This is my forever. Rather than feeling trapped by it, I’ll continue to live my “life sentence” by making it to another year. And another year after that.