A Different Kind of Therapy

“This all stemmed from seeing the therapy dog at the hospital and believing I could make a difference, especially after the situation I went through,” says Kelli Coppinger about her dog, Bandit, becoming a therapy dog.
Web Exclusives – February 3, 2017

Kelli Coppinger and her young daughter, Brianna (Bri), were sitting in the treatment area of the cancer center while Kelli’s husband and Bri’s father, Tom, was being treated for rare B-cell lymphoma. A therapy dog came in, and Kelli and Bri spent time petting the dog.

They had seen this therapy dog in the cancer center before, and Kelli had remarked to Tom that she would someday like to have a therapy dog and make hospital visits.

This innocent interaction with the dog gave Kelli and Bri a small reprieve from Tom’s arduous cancer treatment journey. Kelli and Bri had been spending a lot of time in the hospital and cancer center, and were away from their own dog, a German Shepard named Chief.

According to Kelli, after first being misdiagnosed with Lyme disease and then rheumatoid arthritis, getting to Tom’s cancer diagnosis took approximately 8 months, and by that time, the cancer had metastasized to other organs. In fact, Tom’s condition was so severe that he was sent to Robert Wood Johnson University Hospital—a renowned medical facility in central New Jersey—for chemotherapy because his doctors were afraid that his intestines would burst. The hospital was also the only medical facility nearby that could treat this rare form of cancer.

Bri and Tom pictured together

Tom had multiple cancer relapses. He began with several rounds of chemotherapy followed by radiation. Later on, he had a bone marrow transplant, and then an Ommaya port was implanted into his head when the cancer metastasized to his spine and brain. After 3.5 years of fighting, Tom passed away. “He knew the last time he went into the hospital that he was not going to make it out,” states Kelli.

After her positive experience with the therapy dog, Kelli considered buying a puppy. And if the puppy had the right temperament, she would train it to be a therapy dog. Already beset by tragedy, Kelli learned that Chief was a candidate for a heart attack. It was then that she made a concerted effort to get a dog. After much research, they decided on an Alaskan Malamute. When they received the dog from the breeder, they decided to name him Bandit.

At first glance, Bandit resembles a wolf. He is sturdy and weighs 115 pounds. His angular face brings out his warm features, including his fuzzy ears; wet, black nose; brown eyes; and long whiskers. The smile on his face and the wagging of his tail invite you to come closer. The sheen of his coat and the softness of his fur make you want to pet him continuously and embrace him.

As Bandit was turning a year old, he had already gone through some puppy training classes, and this is when he began therapy dog training. “I got lucky,” says Kelli about Bandit’s calm disposition.

The training lasted 8 weeks, and included learning a number of skills such as feeling comfortable around hospital and nursing home settings; remaining calm and not reacting to loud noises and distractions; learning the command “Leave It,” where dogs must leave food or other things on the floor alone; shaking hands with people; and focusing on people during prospective interactions they would have in the hospital. Lastly, the dog handler and dog have to work together as a team.

Kelli and Bri began Bandit’s work as a therapy dog at a nursing home and a local hospital in Toms River, NJ. “This all stemmed from seeing the therapy dog at the hospital and believing I could make a difference, especially after the situation I went through,” explains Kelli. “I know there are a lot of people in the hospital who are going through what we went through, and I thought it would be nice to give back for the way we were treated. The nurses were always good to us and made us feel like part of their family.”

Almost as soon as they walk through the hospital doors, people gather around Bandit while Kelli and Bri sign in at the front desk. Bandit, Kelli, and Bri walk down the hallways of the hospital and visit patients and their families in their rooms.

Bandit helps patients, as well as the medical staff, forget their worries for a short while, and gives them something positive to talk about. People will ask questions about Bandit and are encouraged to pet him. “People miss their families and pets at home, and this is a nice way to comfort them since their own pets can’t be there,” says Kelli. “It really breaks up the day. Imagine sitting in a hospital, where the days can begin to blend together, and this dog comes in and cheers you up. Or, if you are really upset because you are going through a hard time, it brightens up your day.”

Bandit has been nicknamed “The Gentle Giant,” and Kelli says he has a special way with small children, especially if they are afraid to pet him. When he senses kids are fearful, Bandit will lay down and roll over so that the kids feel less intimidated by his size and eventually warm up to petting him. It’s also not unusual for Bandit to lick kids’ faces. 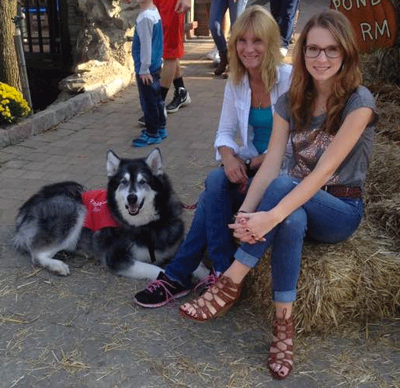 Bandit, Kelli, and Bri pictured together

In addition to his work at the hospital, Bandit has made appearances at the local middle school for Career Day. Children enjoy petting him and being around him.

Thoughts of Tom and Chief are never far, and the therapy work of the Coppinger family has roots in their memories. Through the years, Bandit has brought great comfort to Kelli, Bri, and to countless patients and their families dealing with cancer and other serious health ailments.

Last year, Bandit was diagnosed with cancer in his right paw. His treatment included 2 surgeries, and it has taken several months for him to recuperate.

With a clean bill of health, Bandit recently returned to making hospital visits. Bri, now 16, has grown up with Bandit, who just turned 10. Even as an older dog, Bandit gets around well and is enjoying getting back into his normal routine of therapy work. After 8 years of therapy work, they have no plans to discontinue their visits to the hospital. “He still really loves people and his job,” says Kelli.

Interested in finding out more how dogs become therapy dogs? Check out this video of how Bandit did it.

Family MembersCaregiversMelanoma
What Does Cancer “Feel” Like? Feeling Hollow Inside, but Wearing a Smile
By Christine Tabery
Christine Tabery digs deep into the emotional landscape of dealing with cancer as a caregiver to her husband, who has metastatic melanoma; feeling everything he feels just as if it were happening to her.

Family MembersCaregivers
The Anxiety of Losing Dad to Cancer
By Yasmina Rebani-Lee
Yasmina Rebani-Lee lost her dad after a 3-year battle with metastatic colon cancer. She describes how his battle affected her and her family’s anxiety and general well-being.
Last modified: March 10, 2022