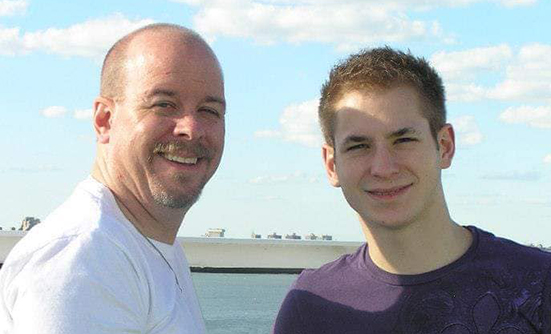 Nate Loch’s attitude and demeanor shaped his approach to a life-threatening brain tumor, subsequent complications, and the prospects of a long recovery while serving as a reminder about the fragility of life.
Web Exclusives

One early spring day in 2011, Nate Loch decided to play a pick-up game of football with some friends. That decision helped to save his life.

Up to that point, Loch didn’t have a care in the world. He was turning 19 in a few weeks, living in Pennsylvania’s Pocono Mountains, and weighing life’s options.

The pick-up game was going fine and Loch was having fun, when he was blind-sided playing quarterback. He got up feeling woozy and disoriented. After he collected himself, he went back to playing―thinking nothing of it, until afterwards. He went to his girlfriend’s house, and her mom, who was a nurse, suggested he go to the emergency department to get checked for a concussion.

Loch met his parents at the hospital, where he underwent a CAT scan. The results showed no brain damage, but they did see something on the scan that warranted Loch having an MRI.

At that moment, Loch remained very calm and was not overly concerned. “They played it off like it was nothing to worry about, so I thought, no big deal,” said Loch.

The next day he received the MRI results…and everything changed. Loch was out with his parents when his dad pulled him aside. “They found a spot on your brain…you have a brain tumor,” his father said.

He was now faced with the severity of the diagnosis and the question that lingers with such a serious health crisis―“Does that mean I’m going to die?” asked Loch.

His doctor told him there was a mass near the cerebellum of his brain, and he didn’t know much more. They were going to have to operate and biopsy the tumor to see if it was cancer. This all happened within the span of a few days. “It was a really fast, snowball effect of a possible concussion, then all of a sudden I find out I have a brain tumor,” said Loch.

Nearly 78,000 brain tumors are diagnosed every year in the United States. Some are metastatic (cancerous) and spread to other tissues and parts of the body, and others remain benign, which lack the ability to spread, and can be removed cleanly and not cause future problems. Of the 78,000 tumors diagnosed, approximately 23,000 people are found to have brain and nervous system cancer tumors, according to federal statistics.

May is Brain Tumor Awareness Month. Tumor symptoms can be more general or specific. Tumors can form anywhere in the brain, and, depending on the location, can cause varying levels of damage as well as a varying ability to treat them.

They are often difficult to diagnose in the early stages and may be found only when there are neurologic symptoms.

When people think of brain tumors and brain cancer, it conjures up thoughts of the worst-case scenarios. Although the brain itself doesn’t have any nerve endings and thus feels no pain, along with the central nervous system the brain controls everything from thoughts to motor functions to memory. The idea that these functions can be affected by treatment is just as daunting as the prospects of pain or death.

According to the American Cancer Society, “the outlook for people with brain or spinal cord tumors varies by the type of tumor and the person’s age. But many other factors can also affect a person’s outlook, such as their age and overall health, where the tumor is located, and how well the tumor responds to treatment. The outlook for each person is specific to their circumstances.” 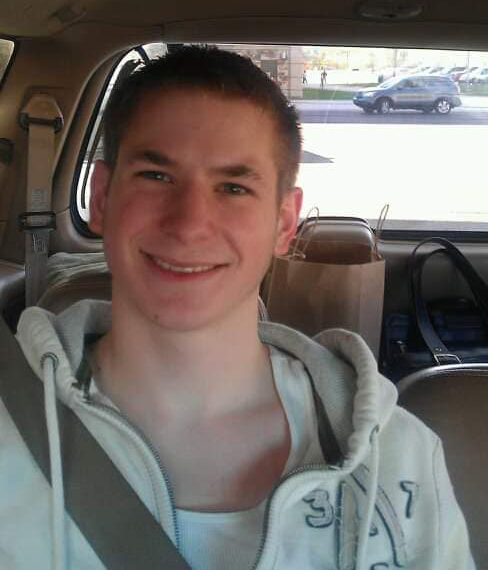 Nate Loch on his way to the hospital for his surgery.
Loch’s physician gave him the option to undergo surgery in as little as 2 weeks or wait until the middle of the summer. Loch opted to get it done right away. Loch’s decision was fortuitous.

A new MRI right before the surgery showed the tumor had started growing. “It is a good thing we are taking this out now because if it kept growing at this rate, it would have killed you before the end of the summer,” said Loch’s surgeon.

His time spent at the hospital was filled with the possibility of complications and a long recovery. His surgeon informed him of potential outcomes associated with the surgery, including needing physical therapy to learn to walk and talk again, facial paralysis, and issues with opening and closing his hands. These things were all disconcerting to Loch as he was athletic, and physical activity was a big part of his life.

When Loch awoke from the surgery, he was surrounded by his family and doctors. His mom asked him how he was feeling. “I felt like in that moment that I wanted to talk but felt I couldn’t. My dad says, ‘I got this,’ and grabbed my mom’s lip gloss and rubbed it all over my lips. It turned out my lips were so dry they were stuck together,” explained Loch.

“’I can talk,’ were the first words that came out. As soon as I was able to talk, I already felt a little better. I didn’t try to move any of my muscles because I was scared I would not be able to move them.”

The next day, after speaking with his dad, Loch told the doctor that he wanted to walk. The doctor told him he wasn’t ready, and that he needed a physical therapist to work with him before he stood up. Loch disagreed with the doctor. “This is what I want to do,” he said, and then grabbed an IV pole in one hand and his dad’s back in the other and stood up. To every doctor’s surprise, he started walking. He walked out of the room and took a couple of steps down the hallway before collapsing in his dad’s arms.

The tumor had initially been the size of a nickel but had doubled in size at the time of the surgery. “Based on how much I removed from your brain, I don’t know how you are walking already,” his doctor said. “I’m going to keep monitoring you, and I’m going to keep pushing you to see if you can recover faster.”

Along with being able to walk and talk right away, there was no follow-up chemotherapy or radiation treatment needed. Loch had his sights set on a quick recovery. His body, however, had other ideas.

For about a month, Loch was in the hospital getting physical therapy and weekly MRIs to see if the tumor was growing back. With his doctor giving him the clear, Loch was released from the hospital. However, after about a week, Loch suffered a terrible headache. He was readmitted into the hospital and was diagnosed with chemical meningitis, which had been caused by some of the drugs administered to him during surgery. The pain has been described as feeling a thousand times worse than a migraine.

The prognosis quickly became dire. “I don’t think he is going to make it,” said a doctor to Loch and his family as he lay in bed. The brain swelling pressed up against his skull and caused so much pain and stress on his body that at one point, Loch lost consciousness and his heart stopped. He had to be resuscitated. Loch saw a bright light and didn’t feel pain anymore―just weightlessness. He awoke 12 hours later to his parents standing over him and thinking that he was not going to live through this.

His doctor put him on a regimen of steroids and opioids to reduce the inflammation and relieve the pain. He began to recover and his doctors did a series of tests to ensure there would be no additional complications.

A person’s approach to their cancer can help in their recovery. Having a good or positive mental attitude can help people get through a very emotionally difficult battle that can include anxiety and depression. Jeopardy! host Alex Trebek recently talked about his sudden bouts of depression while battling pancreatic cancer.

Although obviously concerned for his future, Loch maintained a steady courage that he acknowledged was due in part to a young man’s bravado. “I remained optimistic throughout the whole thing because I was 19 years old and I felt indestructible,” said Loch. “I can do whatever I want and I’ll never die.”

To meet Loch, you can see his even-keeled attitude and his approach to challenges thrown at him helped him deal with what could have been a life-changing health scare.  For example, he had weekly MRIs for months to see if the tumor was back and growing.  “Every time I walked into an MRI, I was thinking I’m going to be fine,” said Loch.

Upon finishing his physical therapy, which was about 6 months after his initial diagnosis, Loch finally felt as if he was going to fully recover. 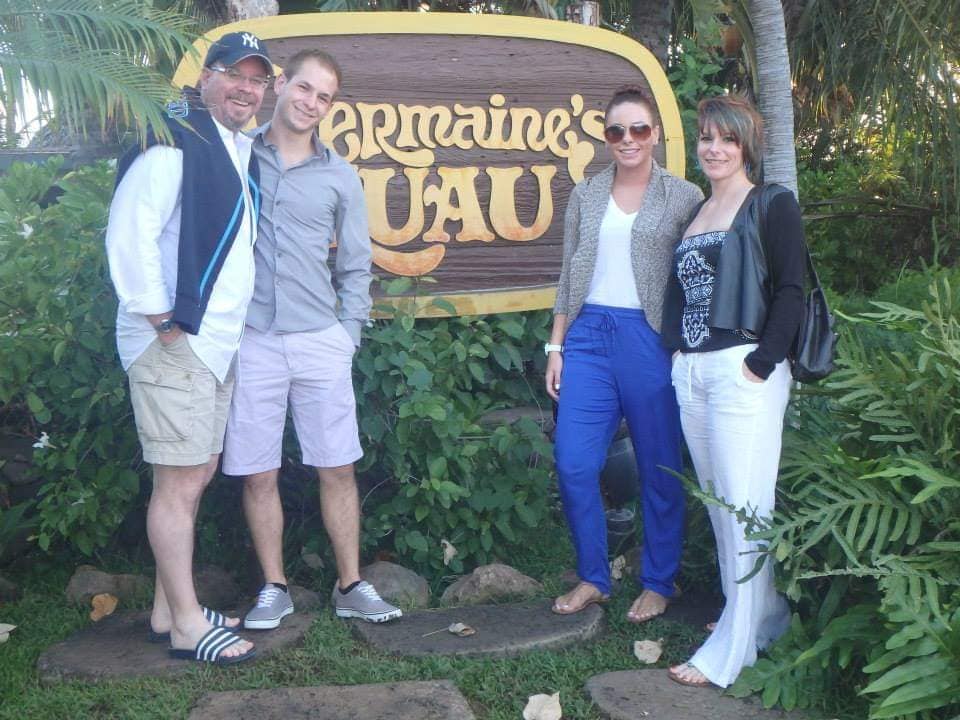 Loch with his family in Hawaii.
During this time, he and his sister Cait began talking about traveling, and one place stuck for both of them: Hawaii. After examining their finances, Loch and his sister decided to move there. “After coming so close to dying, I need to experience something outside the Poconos,” explained Loch of his decision to move. Still Loch needed to be close to his doctor and his health network for follow-up tests. After 2 years, he was cleared to travel. While there he surfed, snorkeled, cliff jumped, and hiked rainforests—all the things a healthy young person should be doing. 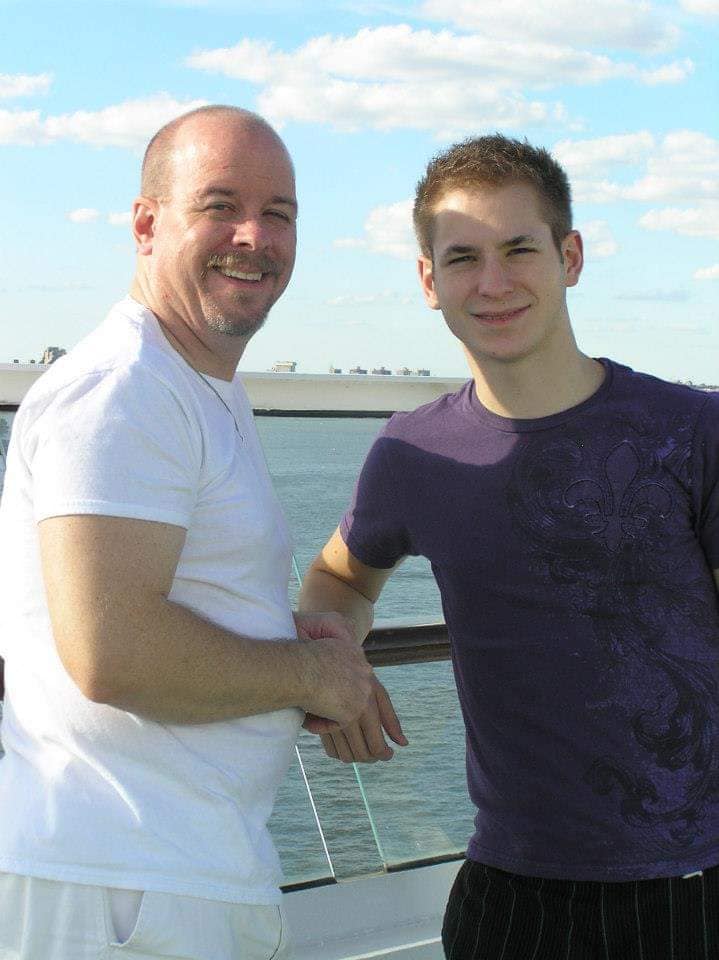 Nate Loch in Hawaii after his surgery.
Aside from a large surgical scar that runs from the back of his neck into his hairline, he has not suffered any serious side effects.

Today, Loch is living in Philadelphia and working his way through college studying kinesiology, considering a career in physical therapy to help rehabilitate people who are dealing with brain tumors. “I would like to help people overcome their health issues.”

The eighth anniversary of his surgery recently passed, and Loch knows how lucky he is. “Thinking back on it, it was a huge moment in my life,” said Loch. “The fact that every little decision I made―whether to play football that day, to get the surgery earlier― seemed to play a role in saving my life.”

Alcohol & CancerPreventionSurvivorship
Put Down That Drink to Elevate Your Health: Alcohol Increases Cancer Risk
By Adam Buffery
Alcohol doesn’t have the stigma that cigarettes do when considering the carcinogenic effects of a drink, and the link between alcohol and cancer should be something that society is more aware of.
Last modified: March 10, 2022