A Second Chance at Life: Kidney Cancer Was My Wake-Up Call to Healthier Living 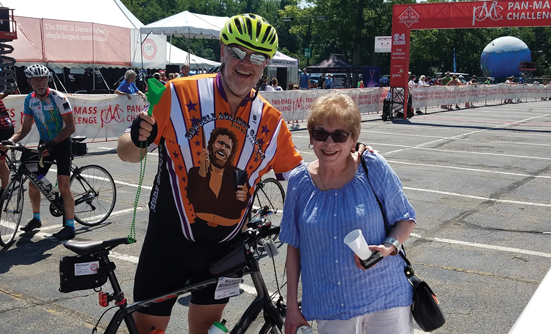 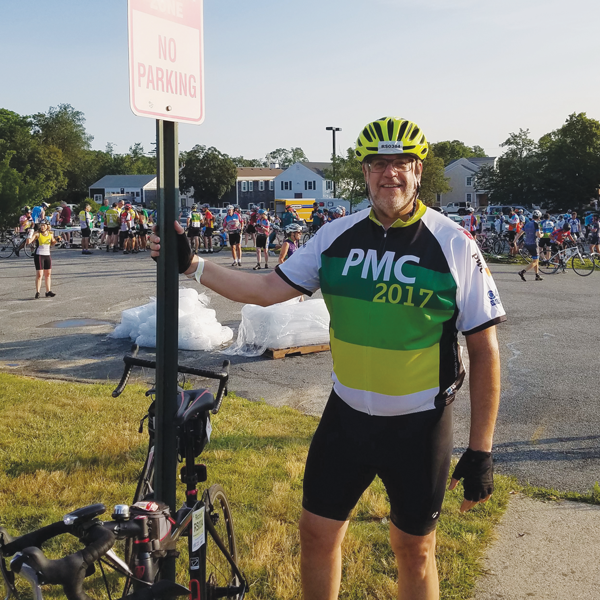 In 2017, I rode 80 miles in the PMC, an annual bike-a-thon that raises money for cancer research at Dana-Farber Cancer Institute.

It’s never good when you have blood in your urine. It’s usually the first sign that something is seriously wrong, but I almost managed to talk myself out of seeing a doctor. It didn’t matter in the end, though, because 2 days before my scheduled appointment to see my family doctor, I ended up in the emergency department with severe pain from what I thought was a kidney stone.

I was in so much pain at the time, that the details from my hospital stay are a little fuzzy, but I do remember the doctor coming in and telling me that the good news was I didn’t have kidney stones, but the bad news was I had a tumor the size of a tennis ball on my left kidney.

“I Think I Got This Thing Beat”

Based on the size of the tumor, I was diagnosed with stage II clear-cell renal-cell carcinoma (or kidney cancer). Luckily, the cancer seemed to be encapsulated in the kidney, so removing the entire kidney was the best course of action. At that point, I wasn’t thinking so much about what having cancer meant because I was more worried about the surgery.

A week later, my left kidney was removed, and the doctor said he saw no signs of metastases, so I recovered from surgery and continued with my life. Of course, I had periodic chest x-rays and CT scans, but for 2 years, it looked like cancer was going to be just a blip on the timeline of my life. In fact, in December 2014, I told my doctor that I thought I had this thing beat.

I don’t think I will ever feel that way again.

It’s Not That Simple

A month later, I felt a lump under my left collarbone about the size of a marble. I ignored it for a while, not putting 2 and 2 together, until one day at work it dawned on me—this could be cancer, again! I had another surgery to get the lump removed, and the biopsy turned out to be the same kidney cancer I had before, which had now spread to a lymph node. This time it was stage IV.

After the removal of the lump and lymph node, my PET scan came back clear, so I was back to square one. I wanted to do something proactive, but my doctor, and the second opinion doctor I sought at Dana-Farber Cancer Institute in Boston, assured me that there was no course of action I could take at the moment, because I didn’t have any cancer.

All I could do was get scans every 3 months and hope that nothing would change. This time, I wasn’t so confident to think I had cancer beat.

Just 3 months later, another PET scan showed the cancer had spread to 4 more lymph nodes and a potential fifth. It was suggested that I should have surgery to remove and biopsy the lymph nodes again. But when I came for the surgery, the surgeon looked me in the eye and said I didn’t need surgery. Since the lymph node that was recently removed tested positive for kidney cancer, what I needed now was to start treatment for kidney cancer.

This was a real wake-up call. His bedside manner might not have been the best, but he did me the biggest favor of my life. I immediately called the doctor at Dana-Farber Cancer Institute—Toni Choueiri, MD—who agreed this was more than likely kidney cancer again, so it was time for treatment.

I enrolled in the CheckMate-214 clinical trial for patients with kidney cancer that was running at the institute. When I signed up for that trial, I didn’t know whether I would get the investigational drug or just the standard-of-care drug, which was scary, but I got lucky and got the study treatment—which was the combination of Opdivo (nivolumab) plus Yervoy (ipilimumab).

Just 3 months after starting to use this combination therapy, the tumors were reduced by 80%, and 6 weeks later, they were reduced by approximately 90%. Within 6 months of starting the clinical trial, the cancer was in complete remission. And it has remained so to this day.

In fact, based on this study, in April the FDA approved this combination of drugs for use in patients with kidney cancer.

Another Second Chance at Life

I’m never going to be quite as cocky as that time I said to my doctor, “I think I got this thing beat.” I just can’t go there anymore mentally. My cancer has been in remission for 2½ years, and I still wonder if there are millions of cancer cells rolling around in my body that a CT scan can’t measure yet.

I never feel totally at ease, at least not at this stage. Maybe if I reach 5, 10, or 15 years cancer-free (knock on wood), I’ll get more confidence.

Regardless of how hard these past few years have been, it was a great wake-up call. I went into the very first surgery weighing 325 pounds. At that time, I was also told by the doctor that I had high blood pressure and diabetes. 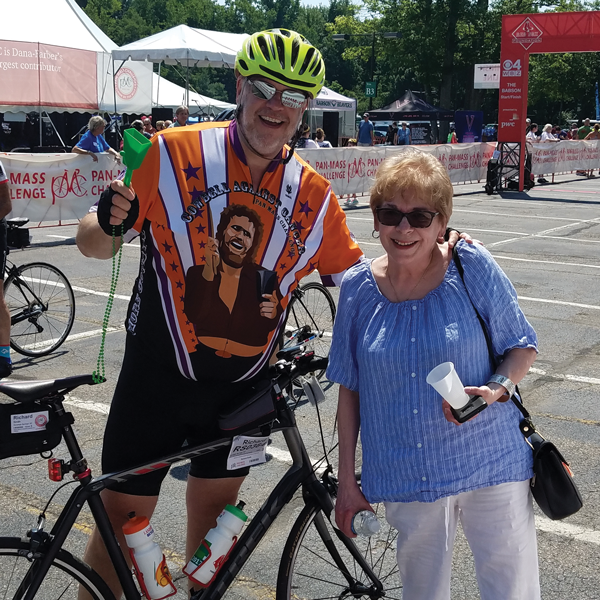 Committed to a Healthier Life

Since the surgery, I’ve made efforts to lose weight, be more active, and live a healthy life. I’ve lost about 50 or 60 pounds, work out at the gym regularly, and took up cycling.

In 2017, I rode 80 miles in the Pan-Mass Challenge (PMC), an annual bike-a-thon across Massachusetts that raises money for cancer research and treatment at Dana-Farber Cancer Institute.

This year I scaled back a little and rode 50 miles at the PMC bike-a-thon, but I was excited that my doctor decided to participate as well, and he did a 90-mile ride his first time out.

We’re on the same team—the team’s name and jersey honor all the spectators along the route ringing cowbells. The team’s name? “More Cowbell” of course!

It’s been a great way to combine something I love doing with raising money for something that means so much to me.